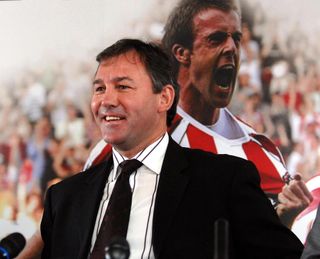 Hi Bry. You had a smashing perm in the ‘80s - but why didn’t you ever grow a proper hardman moustache?
Hold on – go back to 1978 and I did have a ridiculous moustache. It was the same time as the curly perm - I looked a bit like Graeme Souness. My wife at the time told me to get rid of it. I think moustaches were more of a Liverpool thing, anyway.

What’s the weirdest dream you’ve ever had?
I once dreamt that someone was breaking into my bedroom. I jumped up and put my fist through the window to stop them. The glass smashed, but the curtains saved my fist from serious injury. All I had was a bruised knuckle.

Christ! Do you often smash up the house in your sleep?
Well, another time I was asleep and I thought the alarm clock was an oncoming car trying to run me over - I could see headlights - so I punched it to bits. These dreams were all in the early eighties, it was weird.

Apart from twatting your alarm clock, what’s the most pain you’ve ever tolerated?
The dislocated shoulder. I’ve broken legs but they go numb. With a shoulder injury you just can’t get rid of the pain, especially if the physio can’t get it back into place. It really, really hurts.

Ever been to the Aberdeen Angus Steakhouse?
I have.

What did you have?
Steak.

A fine choice...
If I go to an Italian I’ll have pasta. So if I go to a Beefeater or Angus Steakhouse, I’ll have steak.

Impeccable logic. Have you ever been out on the rob, Robbo?
No. I never went shoplifting as a kid. I was a goody two shoes really. I think the worst I did was to take a few quid out me mam’s purse for a bar of chocolate.

Which would you rather sing on karaoke: Michael Jackson’s Bad or My Girl Lollipop by Bad Manners?
I’d go for Michael Jackson. My voice is hopeless – I’ve done karaoke, but only when I’m really drunk. I’d rather sing American Pie given the choice [breaks into shaky version of the Don McLean classic].

Right: there’s a fight to the death at the Hawthorns between you, Graeme Souness, Duncan Ferguson and John Fashanu, using medieval weaponry. What happens?
I’d go for the sword and shield combination, but I don’t fancy my chances. Big Dunc would win, I think. But he’d have to kill me before I gave up.

When did you last have a scotch egg?
It would have been at a family birthday or wedding a few years ago up in the North East. If I see a scotch egg at a buffet I’ll get stuck in, but the wife would never get them in with the groceries.

You came third in Superstars in the ‘80s. What stopped you winning?
The problem was that even though I was at my fittest, I didn’t get a chance to practice the events - I went in cold. I didn’t know how to paddle a kayak, I’d never been in one before, so I was in trouble. The judo lad Neil Adams always used to win. I guess he’d had more practice in the canoe.

If you had a Tardis, what era would you go back to?
I’d probably have a look around Medieval England. But they were all mad back then, weren’t they? It’d be just my luck to arrive back there and it’d be 1066 and I’m standing by Harold.

Ever fancied doing any more acting, following your star turn in Jossy’s Giants?
I don’t mind a small role. I did the Carlsberg ad with the lads a while back so hopefully in the future I’ll get a couple more of them.

What would it take for you to kill a man?
If they harmed my family.

What’s the best thing in your house?
My family – or is it too cheesy to say that? And my OBE – it’s up on the wall in the games room.

You’re a Capricorn. According to astrologer Athena Starwoman, there are two types of Capricorn: the mountain goat, always climbing higher; and the garden goat, which refuses to budge. Which are you, Bry?
The mountain one. I’m always trying to do something different rather than sit still.

What are your three favourite liquids that can be consumed for fun - aka funquids?
Budweiser, white wine and Ribena.

The classic Ribena that you dilute, or the pre-mixed funquid?
The classic. It’s good hot, too. Sometimes in the morning I’ll do that instead of a cup of tea.

What’s the meaning of life, Robbo?
Enjoy yourself, work hard and be healthy.

From the June 2007 issue of FourFourTwo.