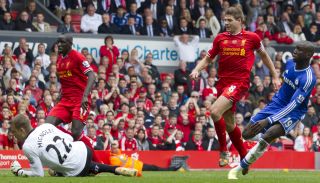 Jose Mourinho may have left Anfield with “nothing to celebrate” despite his side’s 2-0 success over league leaders Liverpool, but there will be plenty of Chelsea supporters dancing a merry jig after Sunday’s tense victory.

And it was a “happy day” in particular for Manuel Pellegrini and Manchester City, capitalising on Liverpool’s loss with a clinical display at Crystal Palace to wrestle back the initiative in the title race. Wins in their final three games at Everton and at home to Aston Villa and West Ham should secure a second Premier League crown, on goal difference at least.

The Portuguese had threatened to field a weakened team ahead of Wednesday’s Champions League semi-final second leg against Atletico Madrid. And although 20-year-old Czech centre-back Tomas Kalas was handed his first Premier League start, there were no other surprises in an XI packed full of know-how.

Blues fans watched on with glee as their side put in the stubborn away performance the world has become accustomed to whenever the Special One is involved. Jose was quick to defend his tactics, which may not have been pretty but were ultimately successful in stopping a team which has torn sides apart at Anfield in 2013/14.

But it’s not Brendan Rodgers’ way of playing the beautiful game, the Northern Irishman commenting afterwards:  "Jose's happy to work that way, to play that way, and he'll probably shove his CV in front of me and say it works, but it's not my way of working. I like to take the initiative in games, try to dominate."

"Our game is based on [being] offensive, being creative, as opposed to stopping. It [Chelsea's approach] is a defensive style, the polar opposite to how we work, and hopefully over time our offensive mentality and aggression will get us long-term results.”

Chelsea’s full-backs were especially effective, helping to nullify the threat of Raheem Sterling; successful with just 5 of 12 take-ons – only 1 being in and around the penalty. Nemanja Matic, meanwhile, evoked memories of his stellar showing against Man City at the Etihad Stadium in February, succeeding with all 5 of his take-ons in the centre of the pitch, winning a game-high 5/7 tackles and making 8 ball recoveries.

That it should be Steven Gerrard whose untimely slip just before the break allowed Demba Ba to fire Chelsea in front was cruel. The Liverpool skipper, revelling in his new role as a holding midfielder, has dug his side out of many a hole this term, converting pivotal penalties to keep the Reds on course for the title.

It’s not the first time the Anfield deity has given Chelsea a helping hand; scoring an own goal in the 2005 League Cup final and gifting Didier Drogba a goal in front of The Kop as Chelsea closed in on the 2009/10 title.

And after the break Gerrard seemed desperate to personally atone for his misdemeanour. Having attempted just 1 shot in the first half, the England captain fired in no fewer than 8 after the interval, 7 of them from outside the penalty area and 0 of them of serious concern to Mark Schwarzer as Liverpool laboured.

“It can happen to any player. Whether Liverpool go on to win the league or not, this doesn't take anything off the player he is and has been,” sympathised international colleague Frank Lampard. “He's been driving them all season. It's not a nice moment."

The calls for Southampton starlet Luke Shaw to join fellow left-back Leighton Baines on the plane to the World Cup this summer have grown louder on a weekly basis. But Ashley Cole’s performances over the past six days have proved there's still a case for Roy Hodgson to take the vastly experienced defender to Brazil.

The 33-year-old has gone from being regarded as one of the world’s best left-backs to seeing a right-back, Cesar Azpilicueta, continually selected ahead of him at Stamford Bridge.

But with Branislav Ivanovic banned in Madrid and both John Terry and Gary Cahill missing on Merseyside, 33-year-old Cole has reminded onlookers how useful an asset he could be up against the world’s best wingers.

Cole, with 107 England caps to his name, had played 90 minutes on just four occasions in 2014 going into the Vicente Calderon clash last Wednesday, but a pair of unflappable performances on the left flank have followed. On Sunday, the full-back won 3 of his 5 tackles and, as always, was keen to get forward, succeeding with 2 of his 3 take-ons as well as testing Simon Mignolet with an early shot from distance.

Toure returns, City back in the driving seat

From seemingly being out of the title race after successive slip-ups against Liverpool and Sunderland, the Blues suddenly have their destiny in their own hands again.

In-form Crystal Palace have become the kingmakers of this season’s race for top spot, having beaten Chelsea at Selhurst Park and Liverpool still to visit.

But it took less than four minutes for Edin Dzeko to head the Blues in front and ensure City would grasp the opportunity given to them by Chelsea's win with both hands.

Although Spanish schemer David Silva is sidelined, Pellegrini was able to welcome back Yaya Toure who put in a man-of-the-match display on his return from a muscle injury.

“I was really disappointed to see that he was fit,” lamented Palace boss Tony Pulis. “To see his name on the team-sheet was a disappointment, he’s such a wonderful player.”

Pellegrini concurred: "He was very important in both goals," said the Chilean. "Yaya only worked with the team the last two days - that's why he didn't play more than 60 minutes, but he's a very important player for us.

"He is a top player and in 10 days that he was injured, he didn't lose too much in his football condition. He just played 60 minutes because he was very tired, but he is a very important player for us."

Three wins from their final three matches will almost certainly secure a second title in three seasons, and it could come down to goal difference again; something Sergio Aguero recently told FFT the club is ready for.

“No one expects to be level on points going into the last game of the season, but we know we have the mentality to repeat 2012," said the Argentine, whose last-gasp goal against Queens Park Rangers two years ago snatched the title away from Manchester United on goal difference.

Ole Gunnar Solskjaer admitted his side have a “mountain to climb” after seeing the Bluebirds comprehensively beaten by Sunderland in Sunday’s crunch clash.

Already trailing to Connor Wickham’s header, City’s task was made impossible after Juan Cala’s poor back-pass and shirt-pull on Wickham meant they went in at half-time two goals down and reduced to 10 men.

Cardiff had enjoyed more of the possession up until the Spaniard’s dismissal, but lacked any kind of penetration with Vito Mannone making just 1 save all afternoon from a deflected free-kick.

For the Black Cats, meanwhile, the great escape is very much back on; out of the relegation zone thanks to seven points from the last nine against Man City, Chelsea and Cardiff.

“We've done everything but done nothing," said Gus Poyet. "There are still games to play, and everything can change. We have put ourselves in the best position possible. We're getting the breaks and maybe we're getting them at the right time, at the end.”

Wickham’s brace made it five goals in three games for the former Ipswich striker, and he believes Sunderland have the character to remain above the dreaded dotted line.

"We've got fighters in the dressing room. We've got determination and grit and that's why we're doing well lately,” he said. "Hopefully, this will give us a boost. We're out of the relegation zone and we'll keep fighting."