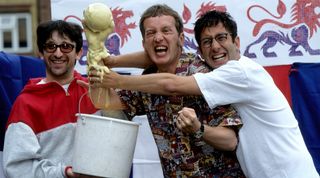 Ahead of this summer's World Cup, the FA have revealed that there won't be a new song sanctioned for the tournament in Russia this summer.

"There is no official World Cup song planned," an FA spokesman said.

The '90s were a glory era for England anthems: kicking off with World In Motion by New Order featuring John Barnes (1990), and leading to Baddiel and Skinner's legendary Three Lions which provided the soundtrack to Euro '96 before being recreated for France '98.

England's official anthem for 1998 was actually (How Does it Feel to Be) on Top of the World? by 'supergroup' England United – featuring Echo and the Bunnymen, Ocean Colour Scene and, naturally, the Spice Girls.

Then it all went downhill. Ant & Dec's We’re On The Ball accompanied Sven & Co. in 2002, before Embrace were handed the baton for 2006 snooze-fest World At Your Feet.

Still, it could have been worse: as we discovered in 2010 with the unofficial track from James Corden and Dizzee Rascal (Shout ) which hit No.1 in the charts.

Ahead of the 2014 World Cup, Comic Relief's version of Take That's Greatest Day – featuring dodgy vocals from Gary Lineker, plus backing worbles from Glenn Hoddle, Michael Owen, Carlton Palmer (!) and a host of other former Three Lions – was quietly dropped by the FA.

So yes: sadly, there's still time for an unofficial effort or two this summer.

The World Cup begins on June 14.