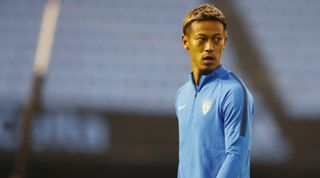 The Japanese attacker converted the hosts' third goal of the match shortly before half-time inside the Estadio Hidalgo.

Honda picked the ball up from behind the centre circle before skipping past five players.

And once the former Milan and CSKA Moscow playmaker had left Tijuana's defence looking silly, he cooly chipped the ball over goalkeeper Manuel Lajud to give Pachuca a commanding lead.

Honda was dropped by Japan coach Vahid Halilhodzic from the national team ahead of their high-profile friendlies against Brazil and Belgium this month. How's this for a response from the 90-cap international?