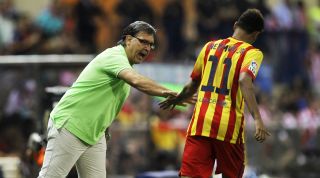 With another round of La Liga just hours away, there are a few big posers on everyone’s minds. Will Atlético Madrid and Barcelona keep up 100% records? Can Almería win their first game of the season? And will Gareth Bale get a chance to look half-decent before Christmas? Here are a few more topics to mull over during the three days of hot Spanish action.

5. Can Rayo pull out of their nosedive?

Poor Rayo are in desperate trouble these days. After a sprightly opening-day thrashing of Elche, the Vallecas side have lost six straight games, conceding 21 goals in the process and scoring just a measly two. To make matters worse, one of their few decent players this season, Seba Fernández, is out for the next six months with a ligament tear.

Manager Paco Jémez says that the fault of all those defeats is the Rayo footballers themselves, having commented before last weekend’s Valencia defeat that “the biggest problem we have is that we are the ones opening our own veins.” Eek.

Saturday’s opponents Real Sociedad have also won just one league game - on the opening day of the campaign - but La Real feel a bit better about themselves, despite a midweek loss in Leverkusen leaving them pointless from two European clashes.

While there's little chance of Jémez being booted out of the club should Rayo fail again, due to nobody out there being mad enough to take on the job of keeping the Madrid minnows up, the international break could be an uncomfortable one if they have just three points in the bag from eight games.

4. Is Luis Enrique on borrowed time at Celta?

The summer arrival of the former Barça B boss caused great oozes of excitement in Vigo. With Enrique having brought in footballers from the Camp Nou cantera, fans were expecting a cheaper but effective version of Barcelona.

Things haven't quite gone to plan though and whilst Celta are undoubtedly good fun to watch, they've won just the one game. Marca report that the coach is running out of credit at the club, with rotations baffling the supporters in a tense relationship that is not helped by a rather aloof nature of the former Roma manager. “Luis Enrique doesn’t have a very open character to explain some decisions,” complained Celta fan group president José Méndez, when probed by the paper.

Unfortunately, that iffy run is set to continue with Celta off to the Vicente Calderón this weekend to take on the imperious Atlético Madrid, a team looking to go into the international break with a perfect winning record in Spain and the Champions League.

“It’s not the ideal rival to be taking on right now,” understated defender Mallo, “but we are going there to win. Beating Atlético would calm a lot of people down before the break.”

3. Will Valencia hijack their own revival?

The one handy aspect of crises arriving very quickly down Valencia way is that they can also go away again just as fast. Thursday’s Europa League win against Kuban was the fourth victory in a row for Miroslav Djukic since the catastrophic defeat to Swansea nearly saw the club going into meltdown.

However, that's not to say that all has been tickety-boo at the Mestalla. Consider the almighty spat opening up between the club and Adil Rami. The French defender is currently suspended and not even allowed

near the training ground for some alleged bad behaviour.

Last week, Rami was kicked out of a training session for apparently being a surly so-and-so before telling the press that boss-man Djukic was “the captain of the ship, but let’s see where he is at the end of the season.”

The club moved swiftly to condemn the player in an official statement, upon which Rami issued his own communiqué attacking Valencia for “damaging his dignity and image as a professional player.” LLL suspects that this can only end very badly indeed, especially considering Valencia are involved.

One of many things that Messi does reasonably well is knock an awful lot of goals passed cannon fodder like Valladolid. It’s a nice knack that Neymar has yet to pick up, having scored just the single La Liga goal – a scrabbly tap-in to open the club’s account against Real Sociedad.

However, the injury-enforced absence of the Camp Nou's unofficial übermeister gives the Brazilian chance to capitalise and rack up a few more against a team with just the one win in seven this season. Perhaps the other big question to be answered is just how long Tata Martino can continue with the saggy lime green polo shirt and beige golfing slacks vibe.

Rather than looking like the manager of a formidable football club, the Argentinian appears as if he is about to return a faulty BBQ set to a DIY store. You have to up your game a little when you're competing with the menacing elegance of Diego Simeone and all round preppy spiffiness of Unai Emery.

1. Can Madrid be less rubbish on the road?

That’s a nasty-looking fixture for Real Madrid, and then some. Two years ago, they lost at Levante; last year, although José Mourinho’s side just about prevailed 2-1, Cristiano Ronaldo had to leave the pitch early after a forearm smash to the eye from deadly defender David Navarro.

Levante are still burly hustlers under the streetwise Joaquín Caparrós, having recovered from an opening-day twonking by Barcelona to remain unbeaten in the following six games. Saturday’s hosts are likely to park 10 men behind the ball, so if Madrid aren’t going to fall even further behind the top two in the title chase, Carlo Ancelotti's men will require solid tactics, a strategy and concentration.

That’s fairly bad news for the Bernabeu boys, who have lacked all three qualities this season, especially on the road. Madrid squeezed passed Granada 1-0, were unbelievably jammy to get a 2-2 draw at Villarreal, and ended up owing a massive favour to the referee for a 2-1 victory at a still-furious Elche. Matters don’t look promising at all for Ancelotti and his merry men.