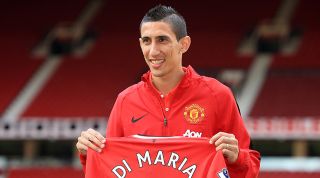 It looks like the longest transfer saga of January 2020 is to be concluded – Bruno Fernandes should be a Manchester United player soon. Emphasis on "should" – there's still time for Barcelona to gazump Ed Woodward.

Ever since Sir Alex Ferguson cleared his desk in 2013, the arrivals lounge at Manchester airport has been a curious sight. World Cup winners, Hollywood playmakers, multi-million-pound defenders, even Fabian Delph - and that's just the players who signed for City.

We want you to cast your mind back, right back, across transfer windows past. Who do you remember holding up a red and black scarf talking of his "dream to play at Old Trafford"?

David Moyes was only able to bring in two of his own men – technically, his first arrival agreed to join before he did – but Louis van Gaal and Mourinho were both let loose with United’s millions before their downfalls. Now Ole's at the wheel and the cash continues to flow.

We just want to know which players have signed for Manchester United since Sir Alex Ferguson retired in 2013. We’re giving you seven minutes to get as many as you can and then tell us how you got on @FourFourTwo.