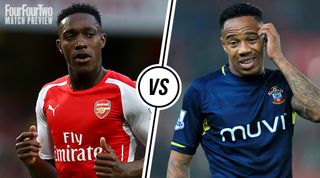 A chance for two stylists to prove they also have substance.

At the start of the season, the bookies would have had this down as a home banker, especially after Southampton lost their first game and drew the second. Then, a funny thing happened. Saints won 11 of their next 12 games in all competitions, propelling them to second in the table, much to the delighting of most neutrals outside of Portsmouth. So low were pre-season expectations away from St Mary’s that not even last week’s 3-0 home loss to Manchester City seemed to burst their bubble, Ronald Koeman carrying this week the air of a man whose next two fixtures were against the Dog and Duck rather than Arsenal and Manchester United.

The Gunners, meanwhile, had their worst start to a league season in 32 years, despite making some seemingly stellar summer signings. In fact, Alexis Sanchez and Danny Welbeck have been two of their better performers, let down by the inconsistency of those behind them and, it must be said, a horrific injury list that is growing by the game.

Despite this, and despite just one home win in the league this season, Arsenal will still start as favourites against Saints, whose only away defeats have come by the odd goal at Anfield and White Hart Lane. Graziano Pelle’s barren run in front of goal and a squad lacking depth will test Saints, but whatever happens in this game, Saints fans will already feel Christmas has come early. Which is more than can be said for their Arsenal counterparts...

Arsenal are facing something of a crisis with Jack Wilshere and Mikael Arteta joining Mesut Ozil and Mathieu Debauchy on the long-term injury list. Alex Oxlade-Chamberlain should be fit, though, after picking up a niggle against West Brom, as should Yaya Sanogo after recovering from a hamstring injury he suffered against Dortmund. Both left-backs, Kieran Gibbs and Nacho Monreal, suffered knocks at The Hawthorns while Emiliano Martinez will continue in goal in the absence of Wojciech Szczesny and David Ospina.

Saints have problems of their own, particularly in midfield, where Morgan Schneiderlin has joined long-term absentee James Ward-Prowse on the sidelines after being forced off at half-time against Man City with a thigh injury. Jay Rodriguez is still some weeks away from a return following a serious knee injury, but Jack Cork should be back after an illness forced him out at the weekend.

With his regular partner in crime, Schneiderlin, missing through injury, Wanyama will have his hands full (probably in tandem with Cork) trying to keep Arsenal’s fluid midfield at bay. Cazorla was at his probing best against West Brom at the weekend, rarely giving away possession, completing 100% of take-ons in the opposition half and, as you can see from the graphic, providing the cross for Welbeck to head in the winner.

The two-footed Spaniard is given license to roam, while Wanyama, as you can see from Saints’ last away win, at Hull, tends to stay more central, tackling, passing and running himself into the ground. He also likes to burst forward on occasion too, providing the odd goal or assist. With Schneiderlin absent, though, he’ll need to be more disciplined than normal.

Koeman is something of a bogeyman for Arsene Wenger, the Frenchman taking six attempts to beat one of the Dutchman’s teams (AZ Alkmaar in the 2009/10 Champions League, since you ask), but normal service was resumed earlier this season when Saints won at the Emirates in the League Cup. Wenger will again be the man under pressure this time, after banners calling for him to resign appeared at The Hawthorns at the weekend. Koeman, meanwhile, says defeat against Man City – who Saints more than matched for 45 minutes – was a “missed opportunity”. With the Emirates far from a fortress this season, he might feel this is one his team can take.