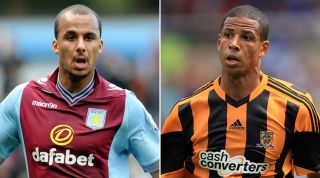 ‘The biggest game of all time’ – Gabby Agbonlahor (for the Villa players, that is).

It all started so well for Aston Villa. Following an opening-day victory at Arsenal it seemed as if Villa had arrived. Gone were the naïve youngsters who had fumbled their way to Premier League survival the season before. They had, it appeared, matured into a swashbuckling powerhouse of a side; strong up front, speedy out wide and secure at the back.

Things were looking up and Lambert’s decision to give youth a chance seemed vindicated. But with three games remaining, all eyes at Villa Park are firmly fixed over their collective shoulders. Gone is the early-season optimism, replaced instead by a familiar dread.

Lambert will point to the ankle injury that has sidelined Christian Benteke until next season as a mitigating factor; had the Belgian remained fit, they may be safe by now. For most Villa fans, this isn’t good enough. Of all the young players to be given a chance by Lambert, only Fabian Delph has made a noticeable improvement from last season. That the Scot is having to rely on the same crop of young players as last season is in part to poor recruitment, with summer signings Libor Kozak (before his leg break) and Aleksandar Tonev underwhelming, much like Wigan loanee Grant Holt.

Hull, in stark contrast, have built their season on the shrewd spending of Steve Bruce. The £5.25 million spent on Tom Huddlestone looks a snip, but it’s the winter purchases of Shane Long and Nikica Jelavic that have ensured the Tigers’ Premier League survival. And it’s this sort of transfer foraging that could have served well for Villa, who look desperately short of goals right now.

Yet, in a strange quirk of fate, it’s these two Bruce acquisitions that may have played a part in helping to keep Villa up, courtesy of their strikes against Fulham last week.

Hull's 2-2 draw at Craven Cottage means Felix Magath’s side will, in all likelihood have to win both their remaining games to overtake Villa. Norwich would need a win and a draw (against Chelsea and Arsenal) while Cardiff would need two wins (against Newcastle and Chelsea).

One point from their next three games should be enough to ensure Villa’s Premier League survival, something they should get on Saturday. Whether this is good enough for Villa fans in the long run remains to be seen.

In Villa’s last four games – three defeats, one draw – Villa have scored two goals, both courtesy of the lifelong Villain. Not much to go on, but it’s one of the few crumbs of comfort to be taken from their recent run of games.

Earlier this week the former England striker claimed this match "was the biggest of all our careers". If Villa are to get anything from this self-styled mega-encounter, Agbonlahor and his team-mates are going to have to find their shooting boots. During their 0-0 draw against Southampton, Villa’s No.11 didn’t manage a single shot on goal, despite playing as the central striker.

Whether Villa are shot shy or not, Davies will be confident of snuffing out any potential danger. Arguably one of the best Premier League centre-backs this season, the former Baggie was once again solid against Fulham last week, making 10 clearances. He’ll fancy his chances against a misfiring Villa front-line.

A shrewd operator who gets the best out of his players. Someone ideally suited to managing in the top flight. It’s an assessment made of Lambert upon his appointment as Villa boss on June 6 last year. Two days later, Bruce was handed the reins at Hull. Less hot young prospect, he arrived at the KC stadium if not quite as damaged goods following his sacking at Sunderland, as an uninspiring choice to mastermind a promotion charge for Hull. He had experience, but there was nothing to get excited about.

He was no Lambert; he of back-to-back promotions with Norwich and an impressive first top flight season. Yet since those summer appointments, it could be argued that reputations have been reversed. If you want someone to play it on the floor, consolidate your place in the Premier League while cannily negotiate the transfer market, Bruce it seems, is your man.

1-1. A point for Villa, which should be enough to keep them up.