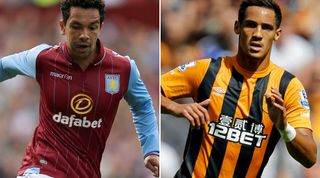 Even at this stage of the season, if you’d told both managers this fixture would see seventh hosting sixth in the Premier League table, they’d have bitten your hand off – and most of your arm.

While Paul Lambert may be overstating it to say that Aston Villa have had a “terrific” start to the season – they’ve scored just once in two league games, after all, and were hanging on against Newcastle last weekend – four points from a possible six and two clean sheets is just what the doctor ordered in the absence of star striker Christian Benteke, especially given the continued uncertainty over the club’s ownership and not to mention captain Ron Vlaar’s future.

It’s early days, but Lambert’s squad looks to have more depth, more solidity and more experience – all much needed. What they need now is more goals, especially at home, where their record was only marginally better than it was away from Villa Park last season.

Hull, meanwhile, are well on the way to improving last season’s dismal away record after victory at QPR on the opening day. They started well against Stoke at home last week too, but couldn’t hold on for the win after James Chester’s early sending off.

Steve Bruce might have stumbled across a solution to Robert Snodgrass’ absence through injury too, with Stephen Quinn doing an excellent job against the Potters in a deeper role.

The Tigers also need more goals, though, something Bruce has spent some of the week trying to rectify.

Michael Dawson was signed from Spurs this week and should slot straight into Hull’s three-man defence in place of the suspended Chester, despite Paul McShane stepping in manfully against Stoke. With a deal to sign Jordan Rhodes “dead in the water” and attempts to bring in Uruguay forward Abel Hernandez from Palermo ongoing, Bruce will have to console himself with the return of Yannick Sagbo from suspension.

Villa must decide whether to give Colombian defensive midfielder Carlos Sanchez a first start after he made his debut against Newcastle, while Joe Cole – unused from the bench last week – is pushing for selection after recovering from injury. Vlaar and Aly Cissokho both picked up knocks against the Toon, but should be fit.

Huddlestone was Hull’s most influential player against Stoke (see graphic), his ability to keep possession or take the pressure off with his wide range of passing crucial when the Tigers went a man down. It was also his shot that led to Tigers' opener. The ketchup-loving quarterback isn’t the most mobile, though, something Villa will hope to prey on, particularly through the pacy Agbonlahor. Operating across the pitch behind Andreas Weimann (see graphic), Agbonlahor could look to drag Big Tom out of position when Villa have possession and get close to the former Spurs man when they don’t.

“We couldn’t be any worse,” said Bruce, while Lambert was fearing the worst after Villa’s 3-1 win in May secured their Premier League status. The Tigers, understandably, were distracted by their imminent FA Cup final appearance having already secured safety, while Lambert’s future was unclear after Randy Lerner declared his intention to sell the club. Both managers head into this game with far more certainty.