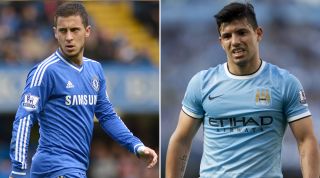 An early hint as to who'll be the alpha male in this season's title race.

Arsenal may be top of the table and, true, Liverpool are sandwiched in between, but it would be fair to say that most people expect both second-placed Chelsea and fourth-placed Manchester City to be close to the podium if not atop it when the honours are handed out at the end of the season.

This game, therefore, represents perhaps the first truly heavyweight battle in the title race. And while other similarly-billed matches earlier in the campaign failed to offer anything other than a few minor clues, with a fifth of the season gone and the table gradually taking shape, matches of this magnitude are increasingly starting to gain in significance.

Chelsea stuttered in the early days of Jose Mourinho's comeback, but there are signs that things are beginning to click. In recent wins against Norwich and Cardiff, the 'Happy One' showed that brilliant knack he has for altering the course of a game using the substitutions available to him and his own tactical nous. With Samuel Eto'o slowly regaining the sharpness to match his natural killer instincts, Fernando Torres reborn against Schalke and Demba Ba impressing at Norwich, Mourinho's powers of motivation look like they're bearing fruit.

City, meanwhile, picked up their first away win of the season at West Ham last week. They've looked formidable at home but the signs at Upton Park and on the cabbage patches of Moscow suggest a tantalising tandem of attacking talents are finding their rhythm on the road too. Aguero, Navas, Negredo and Silva are all in great form at the moment, and while City still have some issues at the back in the absence of Vincent Kompany, they too look good. An intriguing clash awaits us at Stamford Bridge.

Mourinho has said he hopes to have Ashley Cole back in time for this clash. Cole missed out against Schalke and Cardiff with a rib injury, but has trained in recent days and may well recover. Marco van Ginkel is a long-term absentee.

“Vincent Kompany and all of the other players are fit, so we are in a good shape," said Manuel Pellegrini after the CSKA Moscow game. Both Kompany and Martin Demichelis (knee) could be available to face Chelsea.

How do you solve a problem like Yaya Toure? It's a question Mourinho will have been asking himself from the moment the final whistle blew in Gelsenkirchen on Tuesday.

Looking at Chelsea's midfield, it's clear they lack a player with the requisite physicality to handle City's Ivorian powerhouse. John Obi Mikel has been out of favour since he was hauled off at half-time against Spurs, while Ramires, for all his qualities, is no Toure. When it comes to imposing yourself in midfield there's only one winner in that battle. Toure has has profited from having Fernandinho by his side, becoming more expansive in his game, with greater freedom to roam and influence matches higher up the field. The results have been exceptional: Toure has either scored or assisted in five of his eight league appearances this season.

Toure's relationship with David Silva is an important element of City's game. The pair seek each other out constantly, and pass combinations between the two have been the highest of any players on the field in City's last two games. Between Oscar's tactical intelligence and Ramires' energy, Mourinho will need to find a way of reining in Toure's influence if Chelsea are to succeed.

It's Mourinho vs Pellegrini this weekend and the pair certainly have history. Mourinho replaced Pellegrini at Real Madrid after the latter was sacked in 2010, and rubbed salt in the Chilean's wounds in stating, before Real beat Malaga 7-0 in 2011: “If Madrid were to fire me, I wouldn’t go to Malaga. I’d go to a top-level team in Italy or England.”

Pellegrini remained calm, before later making some vague barbs about not liking coaches who prioritise points over pretty football. So an element of rivalry does exist between the two.

If Chelsea can find a way to stop Toure and restrict City's supply line in midfield, they win the game. Let's assume Mourinho, tactical genius that he is, works out a way to do that. Chelsea win 2-1.