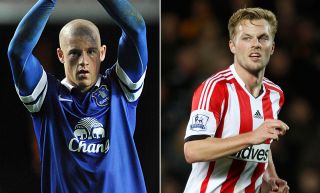 A festive feast for the Goodison Park faithful.

Christmas came early six months ago for Everton fans, who need not have worried when David Moyes’ long association with the club ended in the summer.

Life is good under new boss Roberto Martinez, whose side have still only lost one league game all season and moved to within two points of Liverpool thanks to stonking strikes from Seamus Coleman and Ross Barkley at Swansea.

“Whatever you say about him, you always end up with an understatement," said Martinez of Barkley after the England starlet’s late free-kick secured all three points at the Liberty Stadium. "He is a quite incredible diamond of English football. He's an incredible listener - a young man with an incredible potential. Every game he comes up with something different and every game he shows you that he can develop.”

Toffees fans will turn up on Thursday full of festive cheer and holding no fears that bottom-dwelling Sunderland will deny them a fifth win in six games and a chance to close in on top spot.

Everton are unbeaten in 14 games at Goodison in all competitions since being upset by Martinez’s Wigan in the FA Cup on March 9.

Gus Poyet had insisted there would be “no excuses” for the Black Cats failing to beat Norwich last weekend, having ousted Chelsea from the League Cup four days earlier.

The Uruguayan watched his troops muster 19 attempts at goal, but only four on target, in a goalless draw against the Canaries.

Added firepower will have been on Poyet’s Christmas list this year with Sunderland the second lowest scorers in the division having found the net just 12 times in 30 league outings in 2013/14.

Bottom of the Premier League at Christmas tends to mean one thing, barring West Brom’s great escape in 2004/05. Inflicting a ‘miraculous’ second defeat of the season on Everton would go some way to suggesting Sunderland could defy the odds.

Goalkeeper Vito Mannone is up for the fight, saying: "You need to keep believing. We beat Man City, Newcastle and Chelsea, so I don't see why we should give up the fight. We'll keep putting the full effort in. We might not win against Norwich, but we might win against Everton. You never know."

Indeed, you never know. But the Black Cats have gone 14 games at Goodison without a win – losing 10 – since triumphing 3-1 in November 1996 when Michael Bridges bagged a brace.

Barcelona loanee Gerard Deulofeu is hamstrung until the New Year. Darron Gibson and Arouna Kone are long-term absentees, but Leighton Baines could make his return having been out since the Merseyside derby draw with Liverpool on November 23.

Sunderland’s problems are all in defence (generally), with Keiren Westwood, John O’Shea and Carlos Cuellar out injured and Wes Brown suspended for his challenge on Norwich forward Ricky van Wolfwinkel.

The England starlet added to his growing reputation with a match-winning display at the Liberty Stadium. Swansea simply had no answer to the 20-year-old, who not only hit the sublime 84th minute free-kick but was successful with 4 of his 6 take-ons and was the most fouled player of the game (5).

“He's a real natural talent, and everything he does technically is as good as it gets,” said Martinez. “Right, left, great balance. We didn't know he could take free-kicks, but it's good to know from now on."

Contrasting moods in the dugouts, with Martinez playing down the Toffees’ lofty ambitions and Poyet admitting Sunderland are running out of time to stay up.

"We're in December and it would never be foolish to speak about our league aims, said Bobby. We are trying to be very, very consistent. One defeat in 17 is a real consistent way of performing and the next step is to carry on developing and performing. I don't think we have reached our full potent yet and that excites me. We want to get to April with biggest amount of points we can, then we can set targets."

A downbeat Poyet, meanwhile, reflected on Saturday’s stalemate with Norwich by saying: “We are losing time, we are losing games. I said we needed to win 11 games to think, 'Can we get to 40 points?', and we can't win a football game. This is where we are. The quality is what you see, there is no more.”

The Toffees dish out another tonking, having hit for Sunderland for four, five and SEVEN at Goodison Park in the not-too-distant past. 4-0.