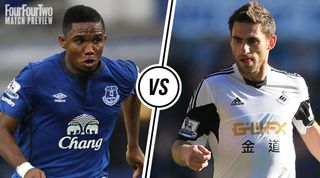 Martinez vs Monk: this time it's personal phone calls.

This season, despite still being in its infancy, has seen a very swift reversal of fortunes for these two clubs.

At the end of August, Swansea were second in the league with an 100% record after three matches, Everton were seven points and 15 places behind them.

Garry Monk won the season's first manager of the month award, while Roberto Martinez was seeing his name in the same sentence as that over-used phrase 'one season wonder'.

To make matters worse for the Spaniard, his team were then gubbed 3-0 in the third round of the League Cup by his former club.

Yet, as we move into November, a home win at Goodison on Saturday would see the Toffees leapfrog Swansea and move into the Premier League's top eight.

After an ominously slow start to the season, Everton are now up and running. Martinez's side are not only climbing the Premier League, but also sit top of a competitive-looking Europa League group, ahead of Wolfsburg and Lille.

That League Cup defeat may actually prove something of a blessing, given it means a relatively small squad will be left to spin just two plates, rather than three.

The Swans' League Cup victory was their first ever against Everton in any competition, at the 21st attempt, yet it was sadly in vain thanks to a 2-1 loss at Liverpool in the same competition on Tuesday evening.

They'll be hoping the week's second trip to Merseyside is a more fruitful one, but with Everton having seemingly rediscovered their mojo, that will be no mean feat.

Everton will once again be without John Stones (ankle) and Kevin Mirallas (hamstring). The good news for the Toffees is that long-term absentees Arouna Kone and Bryan Oviedo are continuing their rehabilitation.

Speaking about the pair earlier this week, Martinez said: "Bryan is doing really well and sometimes you have to stop him a little bit because he is so enthusiastic. Arouna is in the same boat as Bryan but the only thing with him is that we are being careful we don't overload him with work."

Swansea successfully appealed against Federico Fernandez's red card in the midweek defeat at Liverpool. But with Jordi Amat also out through injury, Kyle Bartley could deputise at the back. Midfield pair Ki Sung-yueng and Gylfi Sigurdsson should return having missed the cup ousting at Anfield.

It may have been Samuel Eto'o who scored twice in Everton's 3-1 win at Burnley last weekend, but Belgian battering-ram Romelu Lukaku is still the Toffees' primary attacking outlet. The Belgian did not start 2014/15 in devastating form, but he appears to be slowly clicking into gear, scoring in successive Premier League matches (against Aston Villa and Burnley) and providing a more consistent technical and physical threat. With Swansea without Amat at the back, the pressure will be on the usually reliable Ashley Williams to keep things tight, and he will have been relieved to see Fernandez's suspension overturned by the FA.

Monk played 94 matches during Martinez's reign at the Liberty Stadium, and speaking after the recent League Cup meeting between the two clubs, the former Southampton and Swansea defender admitted he and Martinez were still in regular contact: "I have a good relationship with him and several of his staff. I don't ring him every day but I am sure he is at the end of the phone if I need it. I make my own decisions and guys like Roberto and Brendan [Rodgers] are guys I might speak to if I thought a decision was not quite right but I don't really bother them too much. We talk more about life than football."

Despite this reunion, Monk probably won't be in the best of moods. The Swans' boss was so incensed by the standard of officiating in his team's recent 2-1 defeats at Stoke and Liverpool, that he arranged a meeting with referees' chief Mike Dean. "I'm going to meet him face to face... it's just to get points across," said Monk.

Another frustrating day for Monk and his team. Everton to win 2-1.