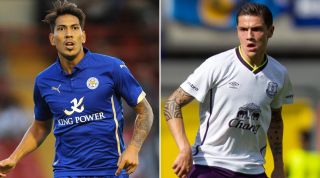 Last time this was a football match, Leicester were still recovering from a scarring trip to La Manga, Wayne Rooney was an Everton prodigy and both clubs were floundering.

It finished 1-1, after Marcus Bent grabbed a 90th-minute leveller against a 10-man Toffees side who had Duncan Ferguson sent off for wringing the neck of Steffen Freund.

Survival turned out to be a bridge too far for the cash-strapped Foxes in 2004, and Micky Adams’ hastily assembled troop of vets were six points adrift by the time Arsenal’s Invincibles had finished with them on the final day.

Things hadn’t gone much better for Everton, though. A hugely promising seventh-place finish in David Moyes’ first season was followed up with an embarrassing 17th, and Rooney swapped Goodison Park for Old Trafford in the summer.

Fast forward 10 years to today, and a glorious outlook for Merseysiders. Moyes’ boys upped their game to finish fourth in 2004/05, and have barely faltered since.

Under Roberto Martinez’s leadership the Toffees have become the most admired team in the league, despite breaking the top-four barrier never being so difficult.

Everton’s summer business has impressed, even if pre-season form hasn’t. The loans of Gareth Barry and, crucially, Romelu Lukaku have been made permanent, while Bosnian grafter Muhamed Besic has joined from Ferencvaros. Martinez’s men haven’t won any of their five summer warm-ups, though, including a 1-0 defeat to this weekend’s hosts in Thailand.

Leicester head into an overdue Premier League season buoyed by their Championship blitzkrieg of last season, having won 31 of their 46 games to finish nine points ahead of Burnley.

Pre-season has been promising, having beaten Everton and Werder Bremen, but it could yet get a whole lot better with the arrival of Argentina legend Esteban Cambiasso, rumoured to be on the verge of signing a two-year deal with Nigel Pearson’s team. It’s a lot more exciting than Matt Upson.

This is the Foxes' first of five tough fixtures to kick off their first top-flight season in a decade, with Chelsea (a), Arsenal (h), Stoke (a) and Manchester United (h) to come. Welcome back.

Leicester’s preparations have been hit by injuries to Marc Albrighton (groin), Anthony Knockaert (ankle) and Jamie Vardy (thigh). Summer signing Upson is set for surgery after missing the whole of pre-season.

Lukaku, Kevin Mirallas and Seamus Coleman are touch-and-go, though all have trained this week. "We don't know yet if they're going to be ready for the weekend," admitted boss Martinez. "Seamus is training with the team and had the 'all OK' from a scan." Bryan Oviedo is still recovering from a broken leg.

Premier League fans unfamiliar with the tricky Algerian won’t be for much longer if last season’s displays are anything to go by. The 23-year-old’s performances for the Foxes were enough to earn him a place in his nation’s World Cup squad, despite only having joined from Ligue 2 side Le Havre in January.

The exciting winger is blessed with pace and confidence in abundance, and looks capable of making the step up to the top flight this season. Full-backs have been warned.

SEE ALSOEverything you need to know about… Riyad Mahrez

Match of the Day viewers shouldn’t expect too many animated post-match ramblings from Leicester boss Pearson, who keeps his cards close to his chest. Premier League exposure isn’t completely new to the former Sheffield Wednesday stalwart – he presided over two games during his Newcastle coaching days: a 1-1 draw against Watford in 2007, and 6-0 hiding from Manchester United the following January. Now the Nottingham-born boss has earned the right to lead his own side after transforming the Foxes in his second spell at the club, after League One promotion in his first.

In the other dugout is Everton’s smiling Spaniard who means business in his second year at Goodison. The £28 million capture of Lukaku was a huge coup for the Toffees in their bid to break the top four, but a long road lies ahead. Thankfully for them, there’s no better man to guide them along it.

Opening-day caginess at the King Power. 1-1.