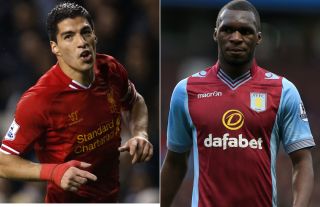 More mid-table meat for Luis Suarez to feast on.

Sound advice fromPaul Lambert, and it might be Aston Villa's best hope of stopping the Uruguayan goal machine. Suarez has netted 15 goals on home soil this season with 14 of them against teams currently in the bottom half of the table; his free-kick against Hull the exception.

The Scot was speaking after seeing Nathan Baker stretchered off against Arsenal last Monday, having been tonked in the temple by a stinging Serge Gnabry shot. The enforced change after 21 minutes disrupted Lambert’s game-plan, switching from a 5-3-2 formation that had kept the Gunners at arm’s length to 4-4-2; Arsenal eventually picking their way through with two quick-fire goals that proved decisive.

Villa have now lost six of their last eight games in all competitions, but Lambert has been given the backing of the board who are playing the long game under his stewardship. “Twelve months ago, we were in a really bad run. We stuck together during that and saw the benefits in the second half of the season,” said chief executive Paul Faulkner.

"We know what the manager is trying to do, we believe it is a good way. Over time it is going to allow Aston Villa to put ourselves in the best position to compete and challenge in the right half of the table where we want to be. If you just look at the short-term you can cause yourself real problems.”

Villa will look to take their second-half display against Arsenal into the first at Anfield, having pushed hard for a leveller against the high fliers. Christian Benteke scored his first goal since mid-September to end a 12-match drought, and Lambert is hopeful the header will spark the Belgian into life on a ground where he was destructive in last season’s surprise 3-1 success, scoring two goals and setting up the other for Andreas Weimann with a delightful backheel.

The Midlanders have only lost once in their last four visits to Liverpool, but few will bet against the Reds recording a 12th win from 13 home games; Southampton are the only side to take anything from Anfield.

Liverpool’s strengths and weaknesses were highlighted in a single afternoon as they won 5-3 at Stoke last time out. Suarez took his goal tally to an incredible 22 in 18 appearances in 2013/14, while Daniel Sturridge returned from injury in style, teeing Suarez up for the fourth goal before scoring the fifth himself.

"Overall I think he's got a wonderful opportunity over the next couple of years of being world-class," said Rodgers on Sturridge. "He has every tool, he has every quality to be a world-class striker, similar to what Suarez is. If we get him onto the field on a regular basis, if he gets a bit of luck and stays clear of injury, then he can be."

Yet another three goals went in the wrong net at the Britannia; the Reds’ defensive deficiencies meaning they run the risk of letting fourth spot slip from their grasp. They may be the second-highest scorers this season, but only Stoke, Norwich and Fulham have conceded more goals away from home.

Sebastian Coates and Villa’s Jores Okore are unlikely to play again this season due to anterior cruciate ligament damage, nor is Libor Kozak who has a broken leg. Baker will sit this one out due to concussion and Chris Herd is hamstrung, but Joe Bennett may be fit following a back injury. Charles N’Zogbia (remember him?) has been sidelined all season with an Achilles problem.

Suarez will be expected to hog the headlines with another haul, and if Villa are to make any sort of impression at Anfield they will need Benteke to be back to his best.

The 23-year-old’s influence against Arsenal increased as the game wore on, allowing Villa to push Wenger’s men back and have them hanging on for the win by full-time. Benteke won 11 of his 19 aerial duels against the Gunners, more than double of next-best Per Mertesacker (5 from 9) and a repeat performance on Saturday could pay dividends against a defence as unsettled as Liverpool’s due to their injury problems.

Goalkeeper Brad Guzan’s long kicks up to the big man proved the home side’s most successful pass combination against Arsenal (19), with 13 of them coming in the second half to help keep Lambert’s charges on the front foot as they mounted a fightback.

ANALYSISHigh-flier to low-rider: What's the problem with Benteke?

Rodgers landed the Liverpool job just a day before Lambert was confirmed as Villa boss in 2012, and it is the Scot who narrowly leads the overall head-to-head 4-3. Lambert’s Norwich enjoyed three wins from four meetings with Rodgers’ Swansea from 2010-12, the last being a 3-2 win at the Liberty with Grant Holt bagging a brace.

Lambert and Holt were reunited this week with the 32-year-old arriving on loan from Wigan until the end of the season, and Lambert is confident he can form a potent partnership with Benteke.

Business as usual: home win with Suarez on the scoresheet. 3-0