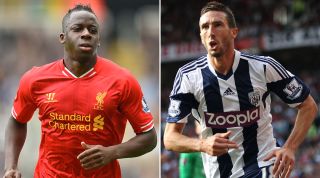 Two Jose Mourinho dugout disciples fighting it out to the death. (Note: there will be no killing. Hopefully.)

On the face of it, this should be a routine home win for Liverpool, but dig a little deeper and the Reds may not have it their own way. Sure, the Merseysiders have won five of their opening eight games – and three of four at Anfield – but defensive frailties persist.

Mamadou Sakho may be constructed from mature teak, but the Frenchman’s introduction to the Liverpool back-line hasn’t been the smoothest. The 23-year-old centre-back looks jittery in possession, while Martin Skrtel suffers similar problems. A return to coach Brendan Rodgers’ back three for Daniel Agger could be the answer, although the classy Dane lacks the others’ mean streak.

They also miss the injured Philippe Coutinho’s invention. That said, with Luis Suarez and Daniel Sturridge in your team, the odd defensive malaise isn’t too insurmountable a hurdle.

Though West Brom lie in mid-table obscurity, and drew 0-0 with Stoke last weekend, their recent form has been impressively understated. Taking four points from successive games against Manchester United and Arsenal, who they were unlucky not to beat, is no mean feat.

Human wrecking ball Youssouf Mulumbu anchors the midfielder with strength and no little skill, frequently topping ball recovery stats and even final-third passes, while Stephane Sessegnon has rediscovered his early Sunderland form in the Midlands.

Throw in a solid back four, for whom Northern Irish centre-back Gareth McAuley is an uber-consistent presence, and Steve Clarke’s men have the team to challenge any team in the league. A clinical goalscorer is all that’s missing – Nicolas Anelka is ageing, Victor Anichebe raw and Shane Long inconsistent. What they would give for another season of Romelu Lukaku…

Jose Enrique’s ongoing knee injury could see Aly Cissokho again deputise down the Liverpool left. Coutinho remains absent, while Iago Aspas will be out until December with a thigh strain.

For the Baggies, Scott Sinclair is close to a return to the squad after hamstring trouble, while Zoltan Gera and Ben Foster remain middle-to-long-term absentees.

Left-back/left wing-back, call it what you like in Rodgers’ fluid 3-5-2, remains Liverpool’s problem position. Injury doubt Enrique has never fully convinced, while Cissokho is still finding his Premier League feet.

In contrast, on-loan French winger Morgan Amaltifano has begun his Hawthorns spell in fine form – he has already scored as many league goals as he managed in two seasons at parent club Marseille, and created the most chances in the club’s last three games.

Both good going forward, Cissokho must tread carefully with West Brom’s wide-man. Amaltifano has right-back Billy Jones behind him for protection, while Cissokho is the Reds' sole dedicated left-sided presence. Defensive diligence will be key.

Rodgers and Clarke sat in opposing dugouts last season, of course, but seeing a pair of former Chelsea coaches against each other still has the feeling of two overly competitive relations attempting to out-do the other at a family reunion.

Both have produced attractive teams that pass well and provide proof that the dearth of coaches in the United Kingdom isn’t perhaps as bad as is frequently portrayed.