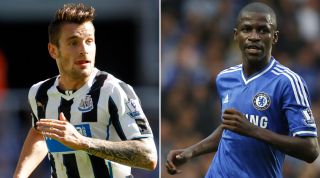 Byker Grove vs Made in Chelsea, aka the Crimes Against TV derby.

FFT can imagine Jose Mourinho drumming his fingers together with a cunning look, crying: "Eeexcellent, it's all falling into place" a la Mr. Burns, at Cobham this week. There was something of Mourinho's Chelsea version 1.0 in the way his Blues ground out a last-minute win against title rivals Manchester City, and then casually dispatched Arsenal with a regal air of authority 48 hours later. Even Fernando Torres is looking as though he's back to his menacing former self.

Chelsea made 10 changes in midweek but still included the likes of Samuel Eto'o - once the world's highest-paid player - John Obi Mikel, Willian and Juan Mata in his second string XI at the Emirates, winning comfortably. Ominously for the rest of the Premier League, Chelsea are clicking into gear.

Newcastle's powers that be have been banning papers like a bag inspector at Glastonbury this week, but that can't paper (literally!) over the cracks of a heartbreaking late defeat in the derby against Sunderland. The Magpies' home record is poor this season - only one win to date, against Fulham in the 86th minute - and having laboured to extra time before being put down humanely against Manchester City in the cup in midweek, Alan Pardew's (tired) men could do with the tonic of a win against one of the league's big guns.

Massadio Haidara and Paul Dummett both limped off in the cup against City in midweek and are doubts for this game as a result. Steven Taylor and Fabricio Coloccini are also unlikely to return in time, giving Pardew a selection headache in defence against one of the league's most potent counter-attacking teams.

Only Marco van Ginkel's ACL tear prevents Chelsea from having a completely clean bill of health, and Mourinho can pick and mix between the teams that beat City and Arsenal.

Yohan Cabaye is in the league's top 10 for shots per game this season, and a significant part of the reason Newcastle lead the division for goals from outside the box. With long-range scorchers against Everton and Liverpool, Cabaye's tendency to shoot from almost anywhere will have to be well-monitored by Chelsea's midfielders, and Oscar usually forms a major part of any tactical plan in this part of the field.

This scribe has raved about Oscar's talents before. Four goals makes him Chelsea's top league scorer this season, while he also has the versatility and tactical intelligence to play spoiler if needed. Whoever seizes control of the Franco-Brazilian midfield battle is likely to have a considerable influence on the result.

Newcastle played a significant number of first-team players in midweek. Cup weariness will cost them. 1-3.