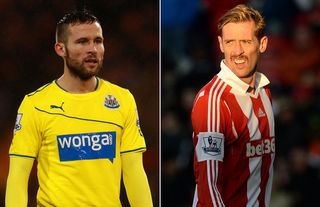 Not the Boxing Day trip Stoke fans would have wished for.

Potters fans boarding the bus at the Britannia on Thursday morning may not be entirely full of festive cheer as they face the 200-mile journey to the north-east.

And they may not be feeling overly confident about their side’s chances at St James’, against a Newcastle outfit who continue to prove they are the real deal.

Gone are the days of being obliterated by Manchester City and Everton, with Alan Pardew’s men having now lost just once in their last eight games since their derby disappointment against Sunderland and League Cup exit to City.

Disposing of a struggling Crystal Palace, 3-0, on Saturday may have seemed routine, but for the Toon it was a sign of how their mentality has evolved, considering they lost by the same score-line at Swansea at the beginning of the month.

As Zonal Marking’s Michael Cox recently noted, the key to United’s transformation has been defensively, particularly up front, with Pardew “asking his forwards to play extremely strict defensive duties without the ball, almost as extra midfielders.”

Newcastle return to St James’ unbeaten in five league games at home since gifting Hull what remains their only away win of the season on September 21, beating Chelsea, Norwich and West Brom before being held by Southampton last time out.

Stoke will head north in good spirits having seen off Aston Villa last time out to make it just one defeat from their last eight league games.

Much has been made of their style transformation under new manager Mark Hughes, but a return to ‘Pulis Mode’ paid dividends against their Midlands rivals.

Long balls from Asmir Begovic to focal point Peter Crouch was Stoke's second most popular passing combination after Geoff Cameron to Crouch, who bagged the winning goal at the Britannia having already teed up Charlie Adam to score the equaliser.

Crouch did not hang around long after the game, hotfooting it down to London instead to celebrate with his lady as she won Strictly Come Dancing; celebrations which went on long into the night, apparently...

Newcastle hasn’t been a happy hunting ground for Stoke over the years. United have won eight of the last 10 meetings at St James’ Park; the Potters’ sole victory in that time coming in September 2010 (2-1).

Both clubs can report a relatively clean bill of health, with long-term knee injury victim Ryan Taylor Newcastle’s only absentee. The knee-knacked Robert Huth is the only player definitely ruled out for the Potters. Matthew Etherington could make his return to action after a back problem, having not played since November 10.

Newcastle will have to cope without midfield powerhouse Cheick Tiote with the Ivorian serving a suspension. When he controls the midfield the Toon invariably control the game. The Ivorian attempted 100 passes in their 3-0 triumph at Palace, completing 86, as well as making 9 ball recoveries, 5 tackles and 7 clearances.

With him patrolling the centre circle, in-form Frenchman Yohan Cabaye has been freed up to pick his way through opponents’ back-lines. The former Lille midfielder gave Tony Pulis’ men a torrid time, firing in 5 shots and netting the opener at Selhurst Park, but the onus will now be on him to help fill the void left by Tiote and pave the way for someone like Hatem Ben Arfa to flourish further forward. Not that that will stop Cabaye trying to get up-field as often as possible, having scored 3 goals in his last 3 outings against Thursday's opponents.

Pardew leads Hughes 4-3 in their seven meetings as managers, the first four when the pair were in charge of West Ham and Blackburn.

The most recent clash came in January 2012 when Newcastle beat QPR 1-0 in what was Hughes’ first game in charge of the Hoops.

Pardew hailed his side’s display at former club Crystal Palace as “dream-like” with the 3-0 success cementing their place in the Premier League’s top six and four points off a Champions League place.

“As an ex-player to come back here and have a team play as well as that, it was almost dream-like," he said. "I'm absolutely delighted with my players; we were terrific. The key was to control possession and make sure the ball didn’t come in our box. The best way is to do that is to keep it. We did it very well."

Hughes, meanwhile, wants his side to “kick on” in the second half of the season after they climbed to 10th in the table after beating Villa.

“We’re certainly going in the right direction. My view is that we’ll be even stronger in the second half of the season just by virtue of the work we do on a daily basis and we want to kick on from this point onwards. We’ve worked really hard in the first period of the season and if we continue that we’ll have a good year.

A hard-fought Toon triumph to keep them on the coat tails of the top four. 1-0.