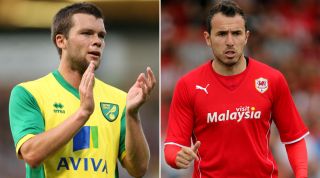 18th plays 17th in a game either side can ill afford to lose.

Last weekend Norwich and Cardiff lost 4-1 to Arsenal and Chelsea respectively, so both teams go back to the drawing board, entering this game on the back foot, on the back of those back-to-back defeats with their backs to the wall. They may be tough old birds but the Canaries and Bluebirds are both struggling.

Some Norwich fans point to a difficult early fixture list that included two trips to North London and visits from Chelsea and Everton; others, with a longer-term outlook and interest in maths, observe that they’ve picked up only 26 points from 29 games since the beginning of the Christmas fixture rush last year. Relegation form, that.

Times are equally tough for Cardiff. The backroom unrest is well known, though not well understood, and whether or not it’s had an effect on the players – though the manner of the defeats to Newcastle and Chelsea suggest it did – they’re on a run that needs turning around. Only a 92nd-minute wonder winner from Jordon Mutch against Fulham separates Cardiff from seven games without a win.

For Norwich, this is a must win. For Cardiff, the next trio of fixtures (Norwich, Swansea and Aston Villa) are key: Malky Mackay won’t want to go into duels with Manchester United and Arsenal with his team in the relegation zone.

Elliott Bennett is out for Norwich with a long-term knee injury and there are match-fitness concerns over forward Ricky van Wolfswinkel (foot-winkel) and Johan Elmander (thigh-winkel).

Cardiff’s only worry is Danish striker Andreas Cornelius, who may yet recover in time but is unlikely to make his first league start for the club. Keeper David Marshall could find his place under threat after a shocker against Chelsea: back-up Joe Lewis played well against Hull.

The midfielder endured a slow start to life at Cardiff after signing from Birmingham City last year – he started only 18 of 46 league games in his debut season – but in recent weeks he has made himself a key figure. In fact, the 21-year-old has recorded a goal or an assist in every league or cup game in which he has played more than two minutes, having come on as a last-minute substitute in every one of Cardiff’s first four league matches.

If he continues to replace tricky playmaker Kim Bo-Kyung in the central attacking midfield role, the onus is on Mutch to create. But instead he has been popping up with important goals, firing home the aforementioned howitzer at Craven Cottage and showing a predatory instinct to give Cardiff the lead at Chelsea after a mix-up in the hosts’ defence.

At Stamford Bridge, Mutch, despite nominally playing behind the striker, made three tackles, two interceptions and nearly a quarter of his passes in Cardiff’s defensive third.

In this visit to a comparatively weaker team, Mutch will need to play further forward just as he did against Newcastle, where he created Peter Odemwingie’s goal, was unlucky to have a one-on-one saved and completed a match-high four out of five take-ons – and he was only on the pitch for the second half. His barrelling runs could be just what Cardiff need.

He still can’t spell either of his names properly, though.

Chris Hughton is under the slightest bit of pressure, which would only be increased should his team fail to beat Cardiff – a relegation-battling team with a poor reputation on the road.

Much will depend on how his forward line can break down the visitors’ defence (funny, that, but hear us out). Norwich have relied upon goals from midfield this season, with just one of their half-dozen coming from a forward and Jonny Howson top-scoring.

Mackay faces a relatively new experience. Cardiff have never lost three games in a row under the Scot’s tenure (in fact, they haven’t done so in the league since 2009) and he won’t want Norwich to break that record.

A scratchy game with two under-pressure sides unable to carve out many chances. 1-1.