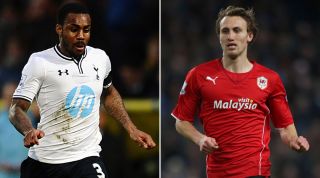 Yep, there they go a-rollin’. On the evidence of last weekend’s dismal results, it looks like they could be off for both of these sides.

Tottenham head into this latest test as clear favourites, but after their 1-0 defeat at Norwich, Tim Sherwood’s men are six points off fourth-placed Liverpool and looking likely to miss out on Champions League football. Again (again).

“If you can't beat Norwich away, with respect, you don't deserve to be in the Champions League,” declared Sherwood, who could really do without saying things like that given his precarious position. At least his side still have the Europa League, which didn't always look the case in the last 32 second leg against Dnipro. The north Londoners rallied after falling behind 2-0 on aggregate, claiming a red-card inspired 3-1 win at White Hart Lane thanks to Emmanuel Adebayor's timely brace.

They could really do with making light work of Cardiff at White Hart Lane, though. In the reverse fixture Spurs hammered their south Wales counterparts before finally grabbing all three points through Paulinho’s stoppage-time winner. In truth, however, it’s not been plain sailing against the league’s so-called lesser sides. Only Arsenal have a better record against bottom-half sides this season, but that doesn’t necessarily tell the whole story; only a late goal beat Fulham, they failed to see off West Brom at home, needed a late penalty to win at Crystal Palace and were beaten against Norwich.

They need the win that will keep them within touching distance of free-scoring Liverpool, but doing it with style like their 4-0 trouncing of Newcastle wouldn’t go amiss. Thankfully, Cardiff couldn’t be more obliging of late. Hull helped themselves to four goals last weekend, taking Ole Gunnar Solskjaer’s league record to P7 W1 D1 L5.

It leaves the Bluebirds three points adrift in the drop zone. They can’t score – as their -29 goal difference demonstrates – although their 19-goal tally is still one better than Crystal Palace’s. That isn't helped by the fact they've attempted fewer efforts on goal than anyone else (84). Tie that in with a 3-0 defeat to Swansea, failing to beat Aston Villa and last weekend’s dreadful result and things aren't looking good.

Now’s about the time we’d suggest a penny for Vincent Tan’s thoughts, but no one wants to know that.

Jermain Defoe has packed his bags for Toronto, having failed to be fit for Thursday’s Europa League clash. Vlad Chiriches (back), Gylfi Sigurdsson and Erik Lamela (both thigh) are sidelined, but Kyle Walker (hip), Younes Kaboul (calf) and Etienne Capoue (muscle) could all return after absences. Sandro is fit again.

Cardiff are still without midfield linchpin Gary Medel, but Jordon Mutch is hopeful of making the trip.

The funny-named Norweigan is Solskjaer’s most beloved possession. Aged 12, Eikrem was part of his current boss’s academy, and then immediately after turning 16 joined him at Manchester United. His Old Trafford career didn’t quite pan out as hoped and when Solskjaer took the reins at Molde his next move was inevitable.

Eikrem was signed at Cardiff within a week of his manager’s arrival. Last weekend he made his first league start against Hull, and although his side crashed and burned, the 23-year-old still emerged with credit. He crafted a whopping 8 chances for team-mates – 5 from his superb set-pieces – and that could be a danger for Tottenham here with Kenwyne Jones ever a willing target. He led the passing charts all over the pitch, meanwhile, validating Solskjaer’s “quarterback” tag cited upon the young playmaker’s signing.

Despite results suggesting otherwise at the start of his reign, Sherwood’s tenure at Tottenham has never looked particularly safe. Indeed, much of it has been spent dealing with unhelpful speculation about who will replace him when he gets the boot at the season’s end – like Holland boss Louis van Gaal, or Italy’s Cesare Prandelli. Sherwood has another season on his contract officially, but that hasn’t stopped the likes of Van Gaal declaring his interest in a Premier League post and that “maybe Tottenham are coming”. Sigh.

Sherwood wasn’t amused with last weekend’s no-show at Norwich, meanwhile, and admits his side will need to show strong stuff in the coming weeks. “It's the first major setback I've had,” declared the Spurs chief. “We're going to need to be spirited to get back and show what we're made of.”

Cardiff boss Solskjaer was equally defiant after the abysmal Hull defeat, saying: “We won't lie down and give up. We were knocked back, but we'll keep working hard and stick together.” Roar. As a player he fared well against Spurs, netting seven times against them - his joint-highest haul against a single Premier League team.