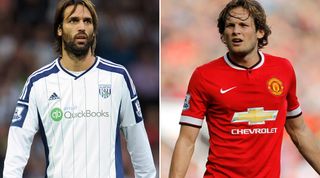 Football's most high-profile split personality comes to the Midlands.

At times this season, Louis van Gaal must have wondered if he'd stepped into the pages of a Robert Louis Stevenson novel. No, not Treasure Island (though Manchester United's spending might have suggested otherwise), but The Strange Case Of Dr Jekyll And Mr Hyde - the macabre story of a man with dissociative identity disorder.

The evidence? Well, going forward, his United look like a pack of ravenous attack dogs, foaming at the mouth with the likes of Wayne Rooney, Radamel Falcao and the effervescent Angel Di Maria.

However, at the back they resemble scaredy cats. During their 5-3 humiliation at Leicester, one was even reminded of Ossie Ardiles's 'Famous Fiv'" line-up at Spurs, where the mantra, "we'll score four, you score six" prevailed until his eventual sacking.

The good news for United is that Van Gaal can now focus on adding defensive muscle to his team's CV with the remainder of his transfer splurge (Daley Blind, Marcos Rojo). The bad is that United aren't quite there yet and mentally they seem a little sensitive.

And West Brom know all about undermining the insecure. They recently sucker-punched a Spurs side still in the early stages of operation under a new tactical system with manager Mauricio Pochettino. The 1-0 victory would have given them plenty of heart.

They've also stuffed Burnley 4-0 and beaten Hull in the League Cup. A win against United is a big, big ask here, but who knows?

An unexpected break and some sustained pressure might yield a blunder or two. It certainly has before.

At last there's some good news on the injury front for Van Gaal who has Ander Herrera (rib), Phil Jones (hamstring), Chris Smalling (hip) and Michael Carrick (ankle) returning from injury. Jonny Evans (ankle) and Antonio Valencia (hamstring) are still sidelined. At West Brom, Chris Brunt is out with a groin injury, while Silvestre Varela, Victor Anichebe and Brown Ideye are nursing knocks.

Di Maria is a player currently frothing with confidence. Having run rampant almost from his arrival at Old Trafford, the Argentine has since faced accusations that he only joined United for the dosh. But who cares when he's delivering a string of jaw-dropping performances? If he keeps it up, he'll be in the mix for various player of the season awards come May.

Certainly, former striker Andy Cole believes he's worth the money. "He has played so well and given a little bit of spark," he said. "It's what you always want when you come for that kind of money, everyone is expecting something special and he's done just that. I think when you come to a football club like Manchester United, there is always going to be pressure but he has played for another massive club in Real Madrid."

Alan Irvine has been singing the praises of centre-half Joleon Lescott. "Joleon is a leader," he said. "I knew that already from working with him before and he will have become more of a leader as he’s got older. He had those kind of qualities [at Everton] and he does it in a good way because he’s not a ranter and raver, or somebody that points at people or grabs them by the scruff of the neck.

"He just has an air of authority about him and players respect what he’s done in the game so it becomes easier for him to be a leader."

Van Gaal has recently received the backing of Sir Alex Ferguson, though he might take that with a pinch of salt given his previous championing of David Moyes. “What has pleased me about Louis is he’s given seven young kids their debuts this year which falls into line with the history of our club," he said.

"The supporters particularly respond very, very well when a young player gets his opportunity. I think that’s exactly what Louis believes in too. The greatest example is how he produced at Ajax to win the European Cup. Edwin van der Sar was in goal, Edgar Davids, Patrick Kluivert.”