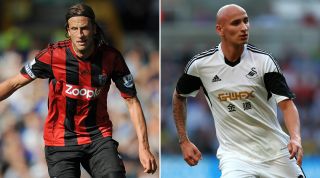 Amid the May celebrations for the lofty Premier League finishes of eighth-placed West Brom and ninth-placed Swansea, born worriers noted that the clubs were roughly as close to relegation as they were to seventh place. Indeed, the Welsh side's 46-point total was only 10 more than that mustered by relegated Wigan. Could the Swans and Throstles come crashing to earth?

It may be too early to panic, but certainly this season hasn't started well in the league. True, Swansea haven't had the easiest schedule - Manchester United at home and a trip to Tottenham either side of a Europa League game - but they won't be happy with having conceded five, scoring only a single late consolation in reply. That said, the glut of goals in the Europa cakewalk against Ploesti showed their potential, and the Swans have had a healthy 11 shots on target in their two league games thus far.

Meanwhile, West Brom have failed to score in either of their league games, losing to a late Southampton sucker-punch before holding out for a goalless draw at Everton; moreover, they've managed a measly three attempts on target in three hours. In the continuing absence of Nicolas Anelka, Steve Clarke badly needs a goalscorer; with loanee Matej Vydra hamstrung and Markus Rosenberg now goal-free in 30 Baggies games, he will be trying not to pin too many hopes on Saido Berahino, who celebrated his first England U21 call-up by scoring a first-half hat-trick against Newport on his full debut.

Michael Laudrup's side may quietly fancy their chances of repeating Southampton's Hawthorns success - the Swans' formation often suits an away game, and they were somewhat unlucky to lose at Spurs last Sunday. There again, one or two may be affected by Thursday's surprisingly competitive dead-rubber second leg at Ploiesti.

Either way, the first goal may well be crucial. Last season, both teams were good at protecting leads and neither particularly proficient at coming from behind; seeking that first league win may tempt the first scorers to keep things tight.

The Baggies have notable absences at both ends of the pitch. Up front, striker Matej Vydra (hamstring) limped off against Newport but Nicolas Anelka is back in contention after last weekend's absence. In goal, Ben Foster's fractured foot means a recall for Boaz Myhill, unless Clarke opts to stick with youngster Luke Daniels. Steven Reid is also likely to miss out.

Swansea have lost Wales full-back Neil Taylor for a month or so (thigh), but have moved swiftly to re-sign Dutch international Dwight Tiendalli. Also missing from the trip to Romania were skipper Ashley Williams (knee), midfielder Jonjo Shelvey (knee), striker Wilfried Bony (ankle) and winger Nathan Dyer (hamstring); all bar Dyer have a chance of returning at The Hawthorns.

Sinclair turns 25 this season; he made his debut in December 2004, and West Brom are the 11th club he has represented. Loaned out by Manchester City just as he so often was by Chelsea, he needs to settle down and fulfil his obvious potential.

Swansea benefited from it for two years, including a dominant performance against the Baggies in 2011 - and they'll fear his direct running and creativity: on his Albion debut against Newport, he bagged an assist within six minutes.

Bright young bosses Clarke and Laudrup each bested the other on home soil last year, but two of the Baggies' goals were scored by the departed Romelu Lukaku and the other was an own goal. Laudrup faces the usual Euro-juggling act, but he has a lot of credit with Swans supporters.