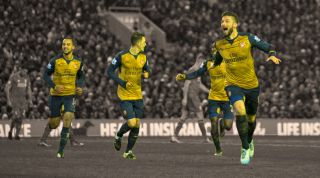 Sunderland had dropped to 19th place in the Premier League after a home defeat to Southampton, but the visit of Charlton to the Stadium of Light just four days later gave them the chance to break out of the bottom three. They didn’t take it.

Instead, they proceeded to shoot themselves in the foot – three times. On an afternoon chock-full of farce, the suitably unlucky Black Cats put through their own net not once, not twice, but thrice. Full-back Stephen Wright was first on the scoresheet, deflecting Charlton defender Mark Fish’s shot past Thomas Sorensen. Michael Proctor inadvertently bundled over the line after a save from the Dane, before again prodding one in at the wrong end to leave the home fans raging as their side trailed 3-0.

Kevin Phillips pulled one back late on, but Charlton were soon laughing all the way back down to London. Literally, we presume. JM

The end of an era for Manchester United and Sir Alex Ferguson – but it wouldn't end with the Scot getting things his own way. By this point the Reds had already wrapped up a 20th top-flight title, but wanted to ensure their long-serving boss went out on a high in his 1,500th and final game. As it turned out, however, this was perhaps the kind of match that made Fergie glad he'd be putting his feet up.

After nine minutes the Old Trafford side had cruised into a two-goal lead through Shinji Kagawa and a Jonas Olsson own goal. After half an hour it was three through Alexander Buttner's lashed effort, but James Morrison stole one back for West Brom before half-time. Still, the Baggies looked dead and buried.

That was until the introduction of Chelsea loanee Romelu Lukaku, playing his last game at The Hawthorns and on a run of just one goal from his last eight games. Five minutes after the restart he clawed it back to 3-2, but the game still seemed lost when Robin van Persie added No.4 for United – his 26th of a fruitful campaign – and Javier Hernandez made it five 10 minutes later.

This, however, was Lukaku's day. He grabbed his second with a fine drive from outside the box on 81 minutes, watched on as Youssouf Mulumbu pulled another back inside the same minute, and completed a memorable comeback (and his hat-trick) with four minutes to spare. One final moment of drama for Fergie before a last wave down the tunnel. JB

The Clarets made quite an impression in their debut Premier League campaign: taking out the champions in their first home match.

With United winning their opening game of the season and the Clarets losing theirs, there was little suggestion on the radar that a storm was coming. But Burnley produced a perfect smash-and-grab victory, enjoying just 37% possession and producing 10 fewer shots than their more illustrious rivals.

The only goal was a thing of beauty, as Robbie Blake showed top-flight technique to hammer a 17th-minute volley past Ben Foster. Brian ‘the Beast’ Jensen saved a Michael Carrick penalty and produced several other fine stops to deny the frustrated visitors. PH

The Canaries were struggling through their first top-flight campaign in a decade, but the visit of high-flying Middlesbrough (it sounded less funny at the time) gave them a chance to hoist themselves out of the drop zone.

Norwich took the lead through Damian Francis, but seasoned campaigner Jimmy Floyd Hasselbaink soon had Boro back on level terms. A second-half double from Franck Queudrue and a fantastic 77th-minute free-kick from Hasselbaink looked to have wrapped up three points for the visitors, but Norwich weren't done just yet. Dean Ashton pulled one back almost immediately, and Leon McKenzie reduced the deficit to one with a minute of normal time to play.

It was Adam Drury who completed a remarkable comeback, heading home in the 92nd minute to give Norwich a well-deserved point. Sadly it was all in vain – they were relegated four months later. SW

A seven-goal six-pointer with all the goals at the same end. Leicester stormed into a 3-0 half-time lead thanks to a Les Ferdinand double and a rare Riccardo Scimeca goal. But Wolves gained heart from two Colin Cameron strikes in the first 15 minutes of the second half, and Alex Rae's header set up the heroic comeback.

Sir Alex Ferguson didn’t receive the 70th birthday present he’d hoped for when bottom-of-the-table Blackburn pooped the party by pulling off one of the shocks of the season and stopping United gaining top spot.

Yakubu put Rovers ahead, firing home a penalty after being clumsily pulled down by Dimitar Berbatov in the box. The Yak was on target again after a blunder from Michael Carrick allowed the Nigerian striker an opening to slot past David de Gea. Berbatov made amends for his earlier error by nodding in Rafael’s mishit shot, then drawing the hosts level after some great work from Antonio Valencia down the right.

A winner seemed inevitable, but it was Blackburn’s Grant Hanley’s who got it, capitalising on some confusion in the United defence to head Blackburn into a late lead. The result left all at Old Trafford stunned, and helped keep Rovers boss Steve Kean in a job. SW

The two fierce Lancashire rivals' first top-flight meeting since New Year's Day 1966 produced a perhaps surprisingly good game. Any chance of a cautious stalemate went out of the window after four minutes when Robbie Blake's curler sent the away end wild, and Blackburn skipper David Dunn levelled for Rovers less than five minutes later with his own curled effort.

Next: Merseyside Madness pts. I, II

The archetypal big man-little man partnership worked wonders for Peter Reid during the more succesful years of his tenure at the Stadium of Light, and one of the highlights for his front two was in this match against Chelsea.

The Black Cats were eager to reverse the 4-0 scoreline inflicted on them on the opening day of the season, and within 40 minutes found themselves four goals to the good. Two Kevin Phillips strikes, one a glorious dipping 35-yard half-volley, sandwiched a Niall Quinn double. They sealed the deal, rendering useless Gus Poyet's late consolation for the shamed Blues. JG

Up to this point the Merseyside derby had mostly been remembered as a 'friendly' one – albeit with the most red cards in Premier League history (it works, honestly). This, though, blew all of that out the water. In a game where both sides were reeled in from holding the lead, this classic showdown at Goodison Park was remembered for all the right reasons.

Philippe Coutinho took advantage of some slack corner defending to jab home an opener inside five minutes, but Everton hit back three minutes later when Kevin Mirallas larruped home a knockdown inside the box. The Reds were ahead again midway through the first half via Luis Suarez's brilliant 25-yard free-kick – his ninth goal in seven games after returning from a 10-game biting ban.

That's how it remained until the 72nd minute, in fact, when the hosts restored parity through Romelu Lukaku's well-placed sidefoot. Ten minutes later the Chelsea loanee had done it again, this time thumping home a header from Mirallas's corner to put Everton ahead for the first time. But the Toffees would be denied a famous win over their city rivals late on. Daniel Sturridge had netted in eight of Liverpool's first 11 games of the season, and the England man was there again when his side needed him to flick home a brilliant Steven Gerrard free-kick one minute from time. JB

Four goals inside the first 25 minutes, and another at the death – this one had everything to keep bums off Anfield seats. Unfortunately for Arsenal, though, this was a bad night that exhibited both the best and worst of striker Olivier Giroud. Though the Frenchman had first equalised and then put the Gunners ahead, inbetween he also somehow managed to divert an effort at an open goal backwards.

This was a topsy-turvy game througout, though. Roberto Firmino bagged a nine-minute double (his second a beautiful curled effort from outside the box) either side of Aaron Ramsey's 14th-minute equaliser; then Giroud made it 2-2 on 25 minutes when he forced in a corner. His second was a neat turn and finish around Kolo Toure – but it wasn't enough, as Joe Allen struck a 90th-minute equaliser in the rain to grab Liverpool a share of the spoils.

In the end, Arsenal's failure to put this game to bed at 3-2 cost them dearly. With 10 minutes left they had a four-point lead at the top of the Premier League; by full-time that was shredded to mere goal difference after Allen's late leveller was complemented 200 miles away by Robert Huth's late winner for Leicester at Tottenham. JB