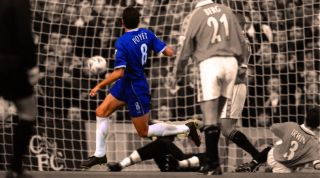 A false dawn for Leicester and Jamie Vardy in particular – though things would turn out just fine for both of them eventually. This was a stonking win on home soil against a Louis van Gaal-led Reds side struggling to adapt to their newfangled 3-5-2 formation.

It didn’t look like it when they were 2-0 down inside 16 minutes, though, after Robin van Persie’s opener was followed up by a beautiful Angel Di Maria chip. Leo Ulloa hit back a minute later as Leicester steadied, but the two-goal deficit was restored on 57 minutes when Ander Herrera’s deflected effort bobbled in.

But then came the fightback: David Nugent made it 3-2 from the penalty spot after a bullish Vardy had knocked Rafael off the ball and then fell under the Brazilian’s challenge. Within two minutes Leicester were level after Esteban Cambiasso lashed home, and were on their way to a famous victory with 11 minutes left when Vardy – who’d run United ragged all afternoon – thumped in No.4 to raise the roof. Ulloa made sure of the points with another penalty before full-time.

This game would precede a dreadful run for both Leicester and Vardy, though: the Foxes didn’t win again until December 28 and only lost 11 of the 13 games in between, while Vardy wasn’t on the scoresheet until March 21. Then came the Great Escape… and 2015/16. JB

Who can forget those lingering images of Martin Keown jumping around wildly, mouth open and arms aloft? Not Ruud van Nistelrooy, we'd imagine.

The closest Arsenal came to defeat in their 'Invincibles' year was this early-season clash at Old Trafford, which was as tense as no score draws get. Former PSV striker Van Nistelrooy had been penalised for jumping into Patrick Vieira, but then recoiled as the Gunners midfielder flicked out a foot, getting the Frenchman sent off in the process.

The Arsenal players reacted furiously, and after Van Nistelrooy slammed his stoppage-time penalty against the crossbar, Arsene Wenger’s players (most notably Keown) mobbed the Dutchman shouting abuse – an act that cost the club a fine and several suspensions. JG

In what must go down as one of the most entertaining Monday Night Football encounters in Premier League history, Charlton grabbed a dramatic late equaliser through a spectacular overhead kick from Swedish striker Jonatan Johansson.

West Ham had taken the lead through Paul Kitson – making his first start for the Hammers in almost two years – before two defensive errors from the visitors allowed Charlton to take a 2-1 lead. Kitson, though, grabbed his second goal of the game with a tidy finish to level things up at the break.

The Addicks regained the lead soon after the restart when Scott Parker’s neat through ball found Johansson, who slotted home past Shaka Hislop. Back came West Ham, however, and Kitson claimed a remarkable hat-trick after good work from Trevor Sinclair on the byline. It looked like Glenn Roeder’s side had won it when former Charlton trainee Jermain Defoe rifled home a volley late on, but Johansson’s acrobatics saved the day for Alan Curbishley’s side. MV

Going into this match, Manchester United hadn't been beaten in 29 league games going back to the previous December. But Chelsea scored after 27 seconds after United goalkeeper Massimo Taibi – who the previous week had let in a shocker against Southampton – scuttled off his line and crashed into Denis Irwin, allowing Gus Poyet to nod into an empty net.

It was two when Chris Sutton scored his only goal in 29 league appearances for Chelsea, heading Albert Ferrer’s cross into the far corner. Nicky Butt was then dismissed for kicking out at perennial mischief-maker Dennis Wise, before Poyet knocked in the third after good work from Celestine Babayaro. A Henning Berg own goal and Jody Morris’s drilled strike were the cherries on Chelsea’s cake. RS

Next: Give us five, Bolton

Saints were determined to make their last game at The Dell a special one, and they did just that with a spectacular win over Arsenal. The fairy tale ending looked unlikely when Ashley Cole gave the Londoners a half-time lead, but Southampton battled well after the break, and two Hassan Kachloul goals either side of a Freddie Ljungberg effort left the scores tied at 2-2 as the match headed towards stoppage time.

With just moments left, a now-veteran Matt Le Tissier thwacked home a thunderous 89th-minute shot on the turn, sending The Dell into raptures for one last time. Textbook. PH

With Manchester City's title bid seemingly on the rocks, United entertained Everton five points clear at the top with four games to play. One of those fixtures was a trip to City, but United knew they had some wiggle room. Nikica Jelavic headed the Toffees ahead, but United soon stamped their authority with goals from Wayne Rooney, Danny Welbeck and Nani. Even a Marouane Fellaini volley couldn't knock the reigning champions out of their stride, with Rooney sweeping home a fourth.

Few United fans were concerned when Patrice Evra headed against the post from close range, but it was to prove the turning point not only in the match, but United's season. Jelavic walloped home his second, before Steven Pienaar waltzed onto the end of Fellaini's reverse pass and slotted home the equaliser. City promptly won at Wolves to close the gap to three points. Game on... JM

Bolton announced their Premier League arrival with an annihilation of Leicester. The Foxes had the better of the opening exchanges but Bolton dealt with the flurry of long balls and Kevin Nolan scored the new season's first top-flight goal with a looped header from a Per Frandsen cross.

Michael Ricketts outmuscled Gary Rowett to larrup in a second before a well-worked Frandsen set-piece was finished by Nolan. In first-half stoppage time Frandsen powered home a free-kick, and the Dane completed the demolition late on by curling a free-kick into Tim Flowers' top corner.

Sam Allardyce's side had arrived but Leicester, who left the Filbert Street pitch to calls for Peter Taylor's resignation, were on a slide that would include two relegations and administration. GP

You remember this one, right? David May's first league goal for United put the title-chasing visitors in front before Gareth Southgate levelled with 10 minutes left.

But the main story happened before either goal: the exit of Eric Cantona, four minutes after half-time. The Frenchman got his fifth red card in 16 months after hoofing Richard Shaw in apparent retaliation for a tackle from behind, but he wasn't done. Assailed from the cheap seats by one Matthew Simmons, Cantona responded with a kung-fu kick to the chest. Cantona – who claimed Simmons' abuse was racist – was sentenced to 14 nights in chokey, later reduced to 120 hours of community service, and banned from football for eight months.

In the Frenchman's absence, United conceded the league title to Blackburn, but they won the Double the following season – and guess who scored the FA Cup final winner against Liverpool? GP

Harry Redknapp’s West Ham seemed beaten as they trailed 4-2 with only 20 minutes to go, in a game marred by a broken leg for Hammers keeper Shaka Hislop after just five minutes. He collided with Dean Saunders and had to be replaced by debutant Stephen Bywater, who endured a torrid introduction to top-flight football.

Dean Windass headed the opener past the rookie stopper, before West Ham turned it around thanks to Trevor Sinclair and a John Moncur screamer. But Moncur quickly turned from hero to villain by shoving over Saunders in the box, and Peter Beagrie dispatched the penalty with aplomb. The bright-red-haired Jamie Lawrence then rattled a quickfire double past a bewildered Bywater, before West Ham staged an unlikely fightback.

Frank Lampard and Paulo Di Canio argued over who should take a penalty; the Italian eventually won and converted successfully. Joe Cole grabbed his first Premier League goal to bring the Irons level, before Lampard smashed in a stunner from the edge of the box to blow Bradford away. RS

Jurgen Klopp’s time as Reds boss would quickly become synonymous with both scintillating attacking and chaotic defending – particularly during his first eight months in charge. For dizzy 3-1 and 4-1 away wins at Chelsea and Manchester City respectively, there were comedown home defeats by Crystal Palace and Newcastle (and those four games came within his first two months in charge).

Liverpool’s ludicrous win at Carrow Road in January summed them up. Roberto Firmino and Dieumerci Mbokani swapped goals before Steven Naismith gave Norwich a half-time lead, but then all hell broke loose: Wes Hoolahan and Jordan Henderson scored within two minutes of one another, Firmino equalised with his second goal and James Milner put Liverpool ahead after a shocking passback from Russell Martin.

Norwich thought they’d salvaged a point when Seb Bassong thundered in a 92nd-minute equaliser for 4-4, but sub Adam Lallana bounced in a cruel winner in the 95th minute to send Klopp potty on the touchline and scrabbling for his specs. “I have a second pair of glasses but I can't find them. It's really difficult looking for glasses without glasses,” chuckled the German. JB