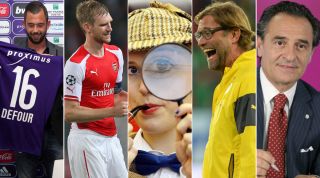 Made it to the group stages with a largely homegrown team, which seems strange to those of us still adjusting to the fact that Belgium are good now. The team is hoping to repeat the glory years of the late '90s, when a strike partnership of the 7ft 10in Jan Koller and the 5ft 1in Tomasz Radzinski caused opposition defenders to fall about laughing.

Did you know? Anderlecht's famous purple shirts are actually red and blue; they just look purple when players run at speed.

Qualified for the Champions League every year since 1998, which is basically the same thing as winning a trophy, according to Arsenal.

Did you know? Arsenal have qualified for the Champions League every year since 1998. Oh, you did?

Their team of young, vibrant stars won many admirers, including Bayern Munich, who proceeded to buy most of them. They have managed to keep hold of Polish midfielder Jakub Błaszczykowski only by forcing would-be suitors to spell his name from memory. The club's yellow and black colours stand for danger, although players will only sting if provoked, and their venom is not deadly.

Did you know? Manager Jurgen Klopp spends the summer months solving mysteries while running a petting zoo for disadvantaged kids.

Can no longer boast Didier Drogba, but is Didier Drogba really something to boast about? Champions League success will depend on which Galatasaray turns up - the successful football club, or the water polo team of the same name. Galatasaray fans have been criticised for their 'welcome to hell' banners, but supporters' groups claim that 'hell' is simply the unbearable loneliness that characterises human existence.

Did you know? They compete in the so-called "Intercontinental Derby" against fierce rivals Derby County.