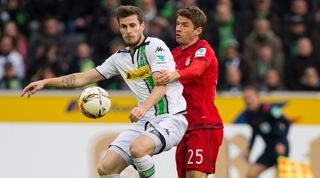 A former hot prospect as a teenager at Arsenal, Norwegian defensive midfielder Havard Nordtveit is remembered by many Gunners fans as one that got away.

After impressing Arsene Wenger – who personally travelled to Norway to scout the then-16-year-old – Nordtveit moved to the Emirates in July 2007 and quickly established himself in the reserve squad.

However, three years and as many loan spells later, he was judged to be surplus to requirements and left for Borussia Monchengladbach after failing to make a single competitive appearance for Arsenal's first team.

Since then, the 25-year-old has become a near constant presence in the Foals’ starting 11, making close to 200 appearances for the club in a variety of different positions.

Highly rated and sought after by several top European clubs, Nordtveit announced in March that he was set to leave the Bundesliga for England when his contract runs out in the summer, and now West Ham have confirmed their snaring of one of Norway’s most impressive talents.

Nordtveit joins on a free transfer on a five-year deal following his departure from @borussia_en#HavardIsAHammerpic.twitter.com/NkNNRI2AmA

After failing to find success at Arsenal, who reluctantly let him leave after conceding that they weren’t able to offer him enough playing time, Nordtveit will make his return to the Premier League in time for West Ham's first season in the Olympic Stadium.

In recent years, the Norwegian has been linked with the likes of Liverpool, Tottenham and Everton, while Arsenal had even been rumoured to be interested in re-signing their former youth product.

Slaven Bilić will manage the defensive midfielder next season though – an experienced Norway international and integral part of this season’s Gladbach team. Nordtveit seems to feel that he has unfinished business in England, making him an interesting new addition to the top flight.

Originally signed by Arsenal as a ball-playing centre-back, Nordtveit has operated in a number of different positions during his 10-year career. A loan spell at Nuremberg in 2009 saw him consistently deployed as a defensive midfielder for the first time, and since then that has been the Norwegian’s preferred position.

Often operating as the deepest of the central midfielders in an attack-minded 4-4-2 formation, he has proven himself to be a strong and disciplined defensive force, one that offers solid protection for the back four.

This season he has often been used as one of three defenders in a fluid 3-5-2 formation, which has allowed him to showcase the solid and dependable defensive skills that impressed Wenger so much. Being deployed primarily in midfield during his time in Germany has also helped improve his passing, which has become a key component of his game.

With a passing accuracy of 83%, Nordtveit has proven himself capable of playing an important role at the base of the Mönchengladbach midfield, while at the other end of the pitch he has chipped in with four goals and one assist so far this campaign.

His versatility and ability to operate in a number of positions is one of the main reasons why Nordtveit has become such an important part of the current Gladbach squad, and is no doubt why he has consistently attracted interest from Europe's top clubs.

Although he has largely impressed when pushing forward, particularly over the course of this season when he has been given more licence to do so, this element of his game could still do with some improvement.

He has a tendency to lose concentration when in possession, which can sometimes lead to gifting the ball in poor areas, while his overall performances lack the consistency needed to turn him into a top truly player. Perhaps some time under Bilić will improve that.

“Howie [Nordtveit] is an absolutely reliable player,” said current Monchengladbach boss André Schubert. “He has a great strength of will and there’s a lot of power and energy in his game. He has a brilliant mentality and takes on every challenge, regardless of which position he’s in and where he’s needed.”

“What I liked in this boy is his intelligence and mental strength,” said Wenger shortly after signing Nordtveit in 2007. “He is very mature. In fact, I have rarely seen a boy of his age so mature. He is an intelligent boy with good vision. He has a good pass out from the back and he is strong too.”

Before moving to Arsenal, Nordtveit featured 12 times for Norwegian team Haugesund, becoming their youngest-ever player in the process.

He first featured for the senior team in August 2006 at the tender age of 16 and went on to score his first professional goal at the start of the following season, less than a week after his 17th birthday.

After failing to break into the Arsenal first team during his three-year stay at the club, Nordtveit’s imminent return to the Premier League presents him with the opportunity to show the Gunners what they missed out on.

Rated! Alexandre Lacazette vs Michy Batshuayi: Who your club should sign this summer

All about Vincent Janssen: The Eredivisie top scorer wooing Wenger and Arsenal

Describing the division as “a goal for every footballer in Norway”, the versatile defensive midfielder is determined to take his career to the next level and it will be interesting to see which position he plays in at his new club.

Equally competent at the base of midfield and in the middle of the backline, the 25-year-old has the ability to help out wherever needed, and he certainly has a lot of skill and experience to offer his new Premier League club.

At international level he has found his opportunities limited in recent months, although his versatility and wide range of skills allowed Norway boss Per-Mathias Høgmo to deploy him as both a centre-back and defensive midfielder on several occasions during their unsuccessful bid to qualify for Euro 2016.

After failing to lock down a regular spot in the team, further impressive performances at a Premier League club could help him cement his place in the national squad for the upcoming 2018 World Cup qualifying campaign.