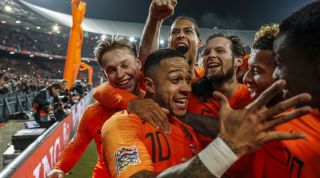 The names of Hendrie Kruzen and Wilbert Suvrijn are mostly unknown outside of the Netherlands, and even younger Dutch fans might not have heard of them – but Ronald Koeman remembers their significance. The pair were selected by Rinus Michels for Holland's Euro ‘88 squad mainly thanks to their positive influence in the dressing room, and returned home with gold medals without actually touching the ball.

Now Koeman, hired as Holland coach in February 2018 likes to recall that story.

At the age of 56, having experienced a managing career of varying success and learned a lot along the way, he understands – probably better than anyone – that atmosphere in and around the team is absolutely crucial. Many thought he should have replaced Louis van Gaal back in 2014, but better late than never: he has changed the mood completely following the Oranje's disastrous spell under Danny Blind. The Dutch are shining again after failing to qualify for Euro 2016 and the 2018 World Cup.

During those years of failure, joining the national team felt like a punishment for Dutch stars. Some enjoyed themselves at club level but were immediately seen as underperformers back home, and the negative headlines seemed inevitable. Confidence was low at a time when the team was transitioning between two generations of players. Koeman's most immediate task was to bring the smiles back to players' faces.

He had a good chance of doing it – or, at least, getting credit for it: many pundits wanted him to get the job, and as such are willing to congratulate him on that front.

Koeman is unique in having played for Ajax, PSV Eindhoven and Feyenoord, and then managed all of them as well. He knows all of the Big Three clubs inside out, and yet is not associated exclusively with any of them. That might be irrelevant when managing Everton, but for Holland that's a incredibly powerful gift. He is trusted because he is unbiased.

Koeman started by naming Virgil van Dijk as captain – a natural decision, and yet still inspired. The pair are lucky to have established a mutual understanding at Southampton, and that bond helps them to take the national team forward. Van Dijk is a centre-back just like Koeman was, and both started their playing careers at Groningen. They are on the same wavelength and the others feel comfortable to follow.

In order to reestablish friendly atmosphere inside the squad, the Dutch moved their training camps from the seaside resort of Noordwijk to the woods of Zeist. That's where Koeman trained with youth teams as a kid, and he brands the location as the hub of Dutch football". "The players love it. They tend to spend more time together, playing games and having fun," the coach explained.

At the same time, the young generation at Ajax started to fulfil their immense potential under the guidance of Erik ten Hag. Matthijs de Ligt, Frenkie de Jong and Donny van de Beek are flourishing en route to superstardom, and the national team have gained serious momentum. Suddenly, everything is bright again – and that feel-good factor has enabled other players to perform too.

Inconsistent stars like Memphis Depay, Quincy Promes and Ryan Babel need to feel loved and admired in order to excel. Memphis was under immense pressure in previous years, and the Manchester United fiasco left him shattered, but he gradually recovered at Lyon and now feels confident knowing that Koeman is going to back him. The coach is much softer with moody players than he was at the beginning of his career, and as a result has the maturity needed to be in charge of a national team notorious for its dressing room problems over the last two decades.

In a way, Koeman's Holland are somewhat similar to Gareth Southgate's England. Both teams used to be criticised for underperforming, but now enjoy wholehearted support of their fans because the managers were able to create a new and exciting vibe around them. Both squads are very far from perfection, but are approaching the Nation League semi-finals with confidence and enthusiasm. Who will shine brightest?

QUIZ! Can you name the Portugal and France line-ups from the Euro 2016 final?