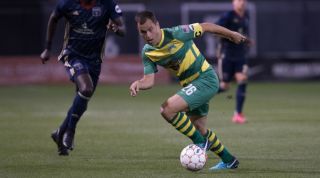 Cole, who is undertaking his UEFA A licence course, joined the Florida-based United Soccer League side back in 2016.

Now, after two seasons, he will balance his playing commitments as club captain with a coaching role.

"I’m very excited to start this chapter of my career with the Rowdies," Cole told the club's official website.

“I have a lot of experience to pass on to the players and I want to play a role in elevating this club to new heights. My primary role is still to play on the field, but I’m very excited to step into coaching as well.”

On May 18, Tampa Bay hired former Wolves and Sheffield United defender Neill Collins as their head coach in what is the 34-year-old's first role in management. The former defender is looking forward to working alongside the three-time Premier League winner.

Collins said: "Joe has an incredible store of knowledge about the game to share with our young players and with our coaching staff.

"One of the main provisos of me taking the head coaching job a few weeks ago was that I wanted to open an avenue for Joe to share that knowledge as an assistant coach. Though he is now a member of the coaching staff as well, Joe’s primary role will remain as a player for the Rowdies."