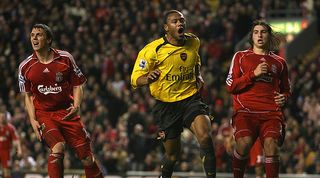 I scored a lot of goals during my first season with Sevilla, but probably the most important was against Osasuna, who ended up with three red cards! The win secured a spot in the UEFA Cup for the club, for the first time in nine years. In the second half Dani Alves crossed, the ball fell at my feet and I scored.

What a crazy game this was – I scored four goals and missed a penalty! The atmosphere was amazing and at the end Liverpool fans applauded me, even though I helped to eliminate their team from the League Cup. That is why I love the English game, and I’ve still got that image inside my head.

The most memorable game of my life had happened three years earlier in the Copa America final against Argentina. I didn’t play: Argentina were 2-1 ahead in stoppage time but Adriano equalised and we won on penalties.

In the 2007 final I played, scored the opening goal and won my second trophy with Brazil. They had a team for the ages – Messi, Tevez, Veron – while we were missing key players. We shocked the world.

The most important goal I scored for Real was the one that gave us a win at the Camp Nou. It was a beautiful goal. Many considered Barcelona as the best team in the world. They had Ronaldinho in his prime. Nobody gave us a chance, but we beat them and went on to win the title – it was a huge achievement.

This feature originally appeared in the March 2017 issue of FourFourTwo. Subscribe!