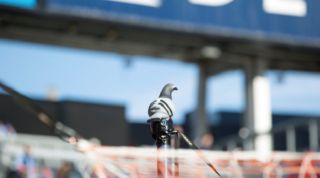 As New York City marched to a 2-1 win over LA Galaxy in MLS on Sunday, the home fans produced a tribute to a pigeon that was struck by a football on the very same turf two years ago.

During a pre-match warm-up at Yankee Stadium, ex-Chelsea hero Ashley Cole and Belgian utility man Jelle Van Damme were knocking the ball between one another when things took a turn for the worst: Van Damme inadvertently hit the innocent bird. After realising what he'd done, he carried the injured pigeon off the pitch - and it survived.

To pay their respects, NYCFC placed a plastic pigeon on a pole during last weekend's match.

Meanwhile, the gods didn't look down too kindly on Cole – he was shown an 85th-minute red card. Ouch.