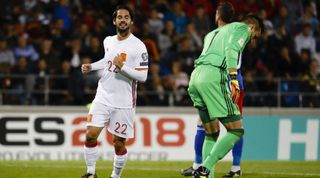 Spain battered Liechtenstein 8-0 in 2018 World Cup qualifying on Tuesday evening, with Alvaro Morata and Iago Aspas both helping themselves to braces.

By the time Real Madrid playmaker Isco had scored his early effort, Sergio Ramos and Alvaro Morata had already netted for La Roja.

But of all Spain's goals on the night, Isco's was certainly the easiest – handed to him on a plate by two-time Liechtensteiner Player of the Year winner Peter Jehle. The hosts' goalkeeper completely mis-kicked the ball inside his box, allowing Morata to intercept and square to Isco for an easy finish.

Spain were four up at half-time via David Silva's 41st-minute effort, before sub Aspas netted twice either side of Morata's second goal. Defender Max Goppel's own goal made it a hateful eight for Liechtenstein.

As if it needed a boost, Spain's goal difference is now +29. Their ruthless victory keeps them two points above Italy with two group games to go (vs Albania and Israel).