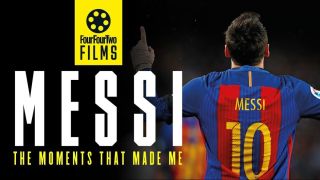 "I was waiting for that debut for so long" Lionel Messi told FourFourTwo. "I was growing impatient for it. I was therefore calm when the time came."

Messi's debut for the Barcelona was met with little fanfare. Academy prospects were frequently thrust into the first team, such is Barcelona's commitment to developing their own stars. It didn't take long, however, for fans to see this kid was different. Taken under the great Ronaldinho's wing in those early years, Messi quickly grew into a key player, soon becoming the focus of one of the biggest teams in Europe.

This exclusive film - revisited ahead of Saturday's 2010 El Clasico watchalong -  walks us through some of the most extraordinary moments in his career, from those first few minutes of professional football to scoring a header in the 2009 Champions League final against Manchester United. The man himself talks about getting the better of Rio Ferdinand, and what Pep Guardiola expected from a 'False 9'.

The documentary also touches on Messi's international career, and discusses the legacy he will leave for Argentina after he retires.

Journalists and fellow players, including team-mates and rivals, are recruited to shed additional light on what makes Lionel Messi one of the greatest players of all time, from his tactical flexibility, to his calm attitude and exceptional talent with the ball at his feet. The result is a fascinating insight into one of the most admired and adored footballers on the planet.

Hit play on the video below, and enjoy another exclusive FourFourTwo Films instalment.