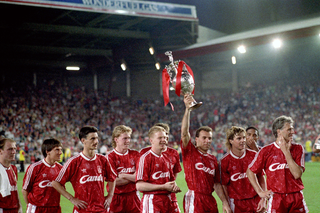 “The first reaction would’ve been ‘put your drink down, you’ve obviously been drinking too much’…” That’s how Liverpool players celebrating in the Anfield changing room after securing the league title in April 1990 would have reacted if you’d told them it would be 30 years until the Reds were crowned Champions of England again.

Liverpool’s 18th league title was secured with a 2-1 win over Queens Park Rangers on 28 April 1990. “You wouldn’t have believed that we wouldn’t have won a title for three years, never mind 30 years,” says defender Barry Venison, who made 37 appearances for Kenny Dalglish’s side that season.

“I can’t remember it being a particularly sensational game,” recalls Venison to FourFourTwo. “We obviously went a goal down, then Rushie and Barnesy scored. Going 1-0 down, especially at home, there was no panic.

“I think the thing people had in their mind, possibly subconsciously, was the way the league was lost the previous season (with the final kick of the ball against Arsenal in 1989), which was horrific.

“But because of that disappointment, a lot of the tension was taken away, because if we didn’t win the game that night there was going to be other opportunities to (with two more games remaining of the season).”

Three days later, on a warm May evening, the trophy was presented to the Reds’ squad after a 1-0 win over Derby. The final day of the season saw a 6-1 thrashing at Coventry to leave Liverpool nine points clear in the final league table.

Dalglish’s side finished 16 points clear of third-placed Tottenham, so no wonder nobody foresaw what was around the corner for the team who had won seven of the last 11 English league championships.

“It felt as if it was something we achieved every single year,” LFC statistician Ged Rea recalls to FourFourTwo. “I think we took it for granted. It was never a case of could we win it, it was a case of when would we win it.”

“After the game, it was the same scenario,” explains Venison. “Every time Liverpool had success, you had Ronnie Moran on top of you in the changing room saying ‘remember, bigheads, it’s done now, you have pre-season coming up, we need to go and win it again’.”

Midfielder Jan Molby says similarly: “As a club, we didn’t see what was coming,” he told Goal. “Yes, you could look at the squad which won the league in 1990 and say it needed a couple of additions, but 30 years with no title?! Nobody thought that.”

“I suppose if we had known then that 1990 was going to be the last time that Liverpool would win it for thirty years, we would have savoured it a bit more,” admits John Barnes, who finished the season as the Reds’ top scorer and won the Football Writers Player of the year.

Venison refutes the suggestion that Liverpool perhaps were too slow to adapt to tactical changes in the English game, but Molby admits “we were losing games we had to win, and that hadn’t happened for a long time.”

Liverpool lost only five times in that 1989-90 season but one of them was a 4-1 defeat at Southampton in the autumn, the heaviest league defeat of Dalglish’s managerial career to-date. The warning signs then were perhaps there.

The dominant Liverpool of the seventies and eighties always strengthened from a position of power, but the only arrivals at Anfield for the rest of 1990 were Tony Cousins (who never played for the club) and Don Hutchinson.

“When you are top of the league you have to make sure that you keep dominating and you keep bringing in players who are able to keep you in that position,” says Roy Evans, who was first-team coach at the time and later went on to manage the Reds.

“When recruitment isn’t quite what it used to be, it goes on a bit longer and you start thinking ‘Hang on, we need a rebuild here’” says Molby. “And when was the last time Liverpool, the great Liverpool, had needed a rebuild?”

Liverpool’s empire began to unravel when Dalglish resigned in February 1991. Graeme Souness was brought back from Glasgow Rangers and big fees were paid out that summer for Mark Wright, Dean Sounders and Mark Walters.

Liverpool, like Molby points out, weren’t used to such a rebuild and mistakes were made. Perhaps they panicked after finishing 13 points behind Arsenal and Souness sought to overhaul an ageing squad. Still, nobody foresaw the issues ahead.

“History told us that if we didn’t win the league, we’d win it the next year,” Molby says. “We didn’t think it was over for us when Arsenal won the league [in ’91].”

And why should they have? It was a squad containing Barnes, Molby, Bruce Grobbelaar, Barnes, Ian Rush, Steve McMahon and Ray Houghton, alongside talented youngsters like Steve McManaman, Rob Jones and Jamie Redknapp. But consecutive 6th-placed finishes followed, then the club’s worst finish, 8th, for 31 years.

“I remember saying to somebody – very misplaced as it turns out – that we could stop playing for 100 years and Manchester United wouldn’t achieve what we’ve achieved,” jokes Rea.

But the 1990s passed without Liverpool finishing in the top two let alone adding to their title haul. Man United dominated and Alex Ferguson’s desire to ‘knock them off their perch’ was eventually delivered in 2011 when the Scotsman oversaw United’s 19th league title.

There were some close calls, with Rafa Benitez’s class of 2009 finishing 2nd despite just two defeats, then Brendan Rodgers’ side’s unexpected title challenge in 2014. Of course, Liverpool should have added their number 19 by now and were it not for the coronavirus pandemic that’s what Jurgen Klopp’s current squad would have done this month.

"I really do hope that after all these years Jurgen Klopp’s side get the opportunity to lift that trophy,” says Venison. “They have thoroughly deserved to win the league and every player who played in that squad 30 years ago would feel exactly the same.”

If and when number 19 is added, Klopp and his squad will have United’s record 20 league titles in their sights – and perhaps the manner of this season’s title being won in an empty stadium will spur them on to win consecutive titles next season.

“I don’t see any reason why they can’t win it next season, too, and for years to come,” says Venison. “They’re in a real good place, the feeling of togetherness, the hunger and love of the manager, the mutual respect.

“When I look across the rest of the league, I don’t see any team who I think Liverpool need to beat when they play them, but every team needs to make sure they beat Liverpool.”

Thirty years of pain for Liverpool have been extended by an extra few months, but 2021 could see them well and truly back on their perch.