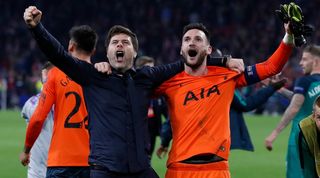 History is written by the victors. It’s one of life’s great truisms, and, when it comes to Premier League football, it has a number of direct equivalents: “Nobody remembers who finished second”, “What’ve they won?”, “Show us your medals”.

All are well-used lines of argument that essentially amount to the same thing: that trophies are the only true measure of success. That, as Bill Shankly put it: “If you are first you are first. If you are second you are nothing.”

A nice line, but it couldn’t be more wrong. History, in football at least, is not really written by the victors. It’s simply not a bullet-point list of who won what. And in many cases, it’s the runners-up, the supposed failures, who are remembered most fondly. We can look to bygone eras for proof of this – Newcastle’s entertainers in 1995/96, Cruyff’s total footballers in ‘74 – but we can look to recent years too. The starkest evidence, in fact, lies in the manager Tottenham have just dispensed with and the man who has replaced him.

Mauricio Pochettino spent five and a half years in north London putting together the most thrilling Spurs side in decades, forging a bond between players and fans that is nigh-on impossible in the modern game, uniting an entire fanbase in admiration for his talents, and delivering some of the greatest occasions those supporters will ever witness. He has spent the club’s money with exquisite care and responsibility, and leaves a squad stocked with excellent young players that should only get better. Decades from now, he will be remembered dearly by at least one generation of Spurs fans, possibly two or three. He won precisely nothing.

Many supporters had long become bored of the risk-averse, wilfully unimaginative football they were served up each week. The squad was stocked full of ageing and grotesquely overpaid players who were fast eroding the club of its identity. He won two major trophies – one per season – as well as the Community Shield.

For Jose Mourinho to prove he is not an anachronism in the modern game, he’ll have to turn back the clock at Tottenham

None of which is to say that Mourinho’s tenure at Spurs is doomed, more that the USP by which he has always sold himself – that, when all is said and done, he is a winner – is not quite the foolproof formula he might think. Leaving aside the fact that he’s not, actually, the winner he was a decade ago (his trophy count has been dwindling ever since he left Inter, with those yardstick league titles in particular becoming ever-rarer), Mourinho will still have to grapple with an awkward reality that he, more than anyone else, has helped lay bare: that some things are more valuable than trophies. Or, as a smart man once said: "It's not about being drunk, it's about getting drunk."

As Mourinho settles into life at Tottenham, he need only look across London to see a club that he left, three years ago, as the most miserable reigning champions in living memory. Chelsea these days are a club transformed, playing freewheeling football under a likeable manager whose youth-centric selection policy has restored the team’s sense of identity. The fans haven’t been happier since, well, the first days of Mourinho.

If Mourinho really is going to make a success of himself at Spurs, he’s going to have to deliver the best of both worlds. Luckily for him, Tottenham already have a united fanbase, a firm identity and a squad full of exciting players. All he has to do is add the trophies.

COMMENT Mauricio Pochettino has left a great legacy at Tottenham. Spurs now have two options to build on it