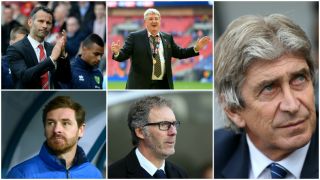 Following England's shock European Championship exit to Iceland, Roy Hodgson (unsurprisingly) packed up his stuff and left. Immediately, the rumour mill started to turn – but nobody seems any the wiser at this point.

Gareth Southgate has been strongly linked with the job but doesn't want it according to reports, while Alan Shearer announced his interest in the role live on TV after the game. Classy.

Meanwhile, former England manager Glenn Hoddle has been suggested as Roy's replacement, and so too have Alan Pardew, Sam Allardyce and Harry Redknapp.

You've been getting in contact with us about who YOU would appoint next. Some of them are viable suggestions, some just plain daft and others – well, we're not quite sure... but here's the best from your array of responses.

Still not a fan of the choices below? Let us know who you would appoint on Facebook and Twitter.