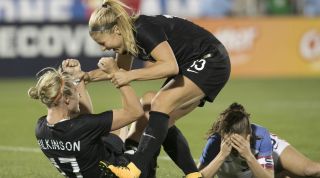 New Zealand Football and the New Zealand Professional Footballers’ Association (NZPFA) have reached a collective bargaining agreement which signals a new era of parity across both national teams.

The four conclusions reached in the new agreement are: pay parity, equal prize money, equal rights for image use and parity across travel while representing New Zealand.

"We are pleased to have the Collective Bargaining Agreement confirmed and with parity for both the All Whites and the Football Ferns," New Zealand Football chief executive Andy Martin said in an official statement.

"The Football Ferns, who are ranked inside the top 20 in the world, are the flagship of women’s football in New Zealand. They are role models for the 30,000 female players throughout our country. It is important to recognise their contribution and form a revised agreement alongside the PFA.

"This has been a positive negotiation and I would like to thank the PFA for the manner in which these discussions have taken place. We come out of these discussions well-aligned and excited about what our national teams can achieve in the next three years under this CBA."