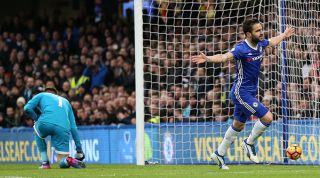 Only one Spaniard was among the strikes in midweek Premier League action – West Ham’s Lucas Perez struck a brace in the Hammers’ 3-1 win over Cardiff at the London Stadium.

But he’s still got work ahead to make it into this club of countrymen who’ve netted five times in the Premier League. Perez came to England via Arsenal in summer 2016, but only scored one league goal for the Gunners before being turfed out on loan back to Deportivo La Coruna for 2017/18.

Two more goals, then, and he’ll join the 29 Spaniards below who we’d like you to recall in today’s quiz. The much-maligned leader is some way clear of the man at No.2 in this list, you’ll notice, so it’s time to show him some love.

You’ve got seven minutes to finish this off and then tell us how you got on @FourFourTwo – we’ll add your score to our daily Twitter leaderboard if it’s strong enough to make the cut. Good luck!

(Please note: Be gone, adblockers! They might also block our quizzes, so you’re probably best turning them off for our site – ta.)