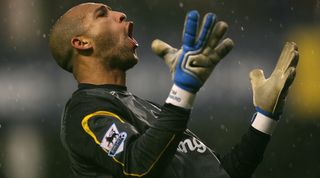 Way to vary it up, Everton. As the Premier League’s six ever-present clubs hit 1,000 games at the end of last season, we’ve taken the chance to quiz you on their top appearance-makers. Arsenal, Chelsea, Liverpool, Manchester United and Tottenham all have a British player atop their lists – but the Toffees go exotic with an American.

That said, he could be supplanted this season as there’s a current Everton player just 20 games behind him on 334 league appearances. He’s one of four current footballers with 150+ Premier League displays who still plays for the Merseyside club.

In a way, Everton are the least likely ever-presents as they spent several of the early Premier League seasons after 1992/93 dodging relegations in a series of unlikely ways. Yet they always managed it, thanks no doubt to this motley crew of homegrown talents and redoubtable imports.

We’ve put 10 minutes on the clock to name them all – probably easier if you’re an Everton fan, but all are welcome to the challenge. Let us know your score @FourFourTwo – we’ll retweet the best, if you don’t give answers away. Good luck!