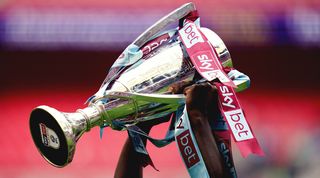 10 minutes on the clock, 136 clubs to guess, though many of them appear more than once - much to the frustration of those clubs' fans.

NOW TRY Quiz! Can you name every English club to qualify for Europe since 1992?

We won't tell you who scored it, who for, and who against - because that's what we'd like you to guess for today's quiz.

The play-offs have been a staple of lower-league life since 1987; a pot-luck lottery for those who didn't quite make the automatic promotion spots. They're a source of drama and tension for anyone in them, but great fun if you're a neutral. Not unlike penalty shootouts, really...

Some may say they're the best way to go up, but the worst way not to. Who have been both the lucky and unlucky sides over the past 33 years?

TRANSFERS The position EVERY club needs to strengthen in this summer