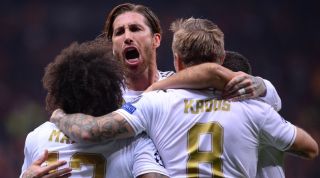 We simply do not believe it is possible to get perfect marks in this quiz. Unless perhaps you’re the kind of monster who records every Champions League draw and watches each glitzy ceremony endlessly repeat (hi Sepp – thanks for reading).

The top clubs should be simple enough. You’re going to get the team that’s played the most Champions League group games (165) since Europe’s top club competition was given its makeover in 1992/93. You're probably going to get the top 10 without much trouble. You'll brush off most of the English clubs without breaking a sweat.

Once you get further down the list though, to the clubs that have just appeared in one round of group games, it gets a fair bit trickier. One side, you'll notice, has only played three games ever – they're playing in the group stage for the first time this year.

Fifteen minutes are on the clock and please let us know your score @FourFourTwo. We’ll retweet the best, if you don’t give answers away. Why not challenge some pals while you're at it?

QUIZ Can you name the 32 players with most touches in the Premier League this season?

CHAMPIONS LEAGUE Erling Braut Haaland is the latest young star to be chased by Europe's elite clubs. He shouldn't go to any of them