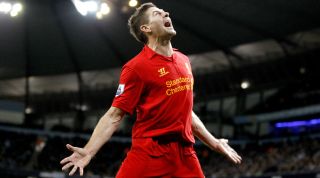 Liverpool have played exactly 1,000 league games since Sky Sports invented football back in 1992, as the First Division morphed into the Premier League. A perfect time to quiz you on England’s six ever-present top-tier clubs of the last 26 seasons.

The Reds have quite the eclectic line-up in the list of their 50 highest appearance-makers over that time. It includes 20 different nationalities, even if it is topped by two English players, who are almost neck-and-neck on 508 and 504 Premier League games for Liverpool respectively.

A lucky seven players on this list are still playing for the Reds and adding to their total, while the rest have departed Anfield but are fondly remembered. Well, most of them.

Ten minutes are on the clock and we’d love to know your score @FourFourTwo. We’ll retweet the best, if you don’t give answers away. If you challenge some friends while you’re at it, that’d be absolutely boss. Ta!