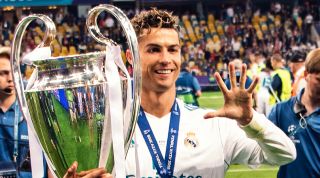 12 minutes on the clock, 80 names to guess - some appear more than once

It's an iconic image: Cristiano Ronaldo, standing with the Champions League trophy in one hand, the other hand open to indicate how many times he'd been there before.

So that got us thinking - who have been the most successful players in each of the big four competitions in England - the four you'd need to do a quadruple - since 1992?

There are some obvious names here. Once you name a few, you get a hang for who the teams were that lifted the trophies and then it becomes much easier. This should be a piece of cake...