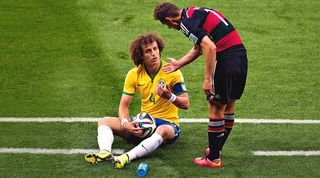 Eight minutes on the clock, 44 players to guess.

NOW TRY Quiz! Can you name the European clubs that Brazil's 2002 World Cup side played for?

Brazil reached the pinnacle in 2002, thanks in part to the three Rs, Ronaldinho, Rivalo and Ronaldo. But it's not been the smoothest of rides since.

In 2006, defending their title in Germany, the boys from South America came up against one of the most iconic performances in World Cup history, as Zinedine Zidane rolled back the years and led a masterclass against them once more. They've not been the same since.

2010 saw a Wesley Sneijder-inspired Dutch side roll over the Selecao. Two years ago in Russia, it was the Netherlands' neighbours, Belgium, with Hazard and De Bruyne running riot.