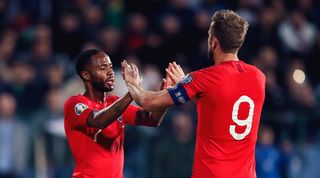 Five minutes on the clock, 55 players to guess.

NOW TRY Quiz! Can you name every Champions League final scorer since 2000?

In the first-ever match with shirt numbers - Arsenal vs Sheffield Wednesday, by the way - one team wore the No. 1 through to 11. The other side wore No.12 through 22. Weird, huh?

Shirt numbers really aren't supposed to be that deep but for some reason, we do assign some kind of myth to them. David Beckham made the No.7 cool for a generation, after all.

And so, kids growing up these days dream of wearing the No.10, the No.7 - even the No.1 for England one day. It's symbolic - despite the fact it's just a number.

Since the England squad was announced yesterday, could you tell us the last five players to wear 1-11 for the Three Lions?