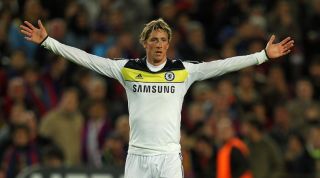 Is one goal worth £50 million?

Alright, but what if it was that goal?

You know the one. At the Camp Nou. On the break. In the opposition's half. On his own. ("The most dramatic story of the season!") Around Victor Valdes. An open goal. (Is Gary Neville alright?) He passes it in. He's not even looking. (Seriously, can someone check on Gary?) The Champions League final awaits. (Gary, here's some water.) And we know what happens then.

So, Fernando Torres, Chelsea fans. As he announces his retirement, it's time to ask again: was it worth it?

One good way to think about it may be this. Below we have listed the 50 biggest transfer fees Chelsea have ever splashed out. As you go through naming them, ask yourself this: did this player score a goal that ensured Chelsea got to a Champions League final?

Anyway, we've given you each star's transfer fee and the club they came from; all you have to do is tell who who arrived to collect their big fat pay rise in the 10 minutes provided.

As usual we'd like you to let us know how you got on @FourFourTwo, and we'll retweet your scores if you don't give away answers. Then tell some friends about it to see if they know their expensive onions better than you do.