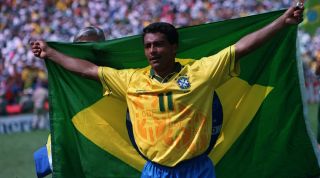 Normally a goalscoring midfielder, Balakov failed to find the net at USA 94 and missed his penalty in the second-round shootout victory against Mexico, but he was also at the centre of everything the surprise semi-finalists did well – the schemer to Stoichkov’s spearhead. The two complemented each other perfectly on the field, despite often being at each other’s throats off it. Balakov moved to Stuttgart a year after the World Cup, where coach Joachim Löw – now in charge of Germany – hailed him the best playmaker in Europe.

Skip to 3:30 for our man's penalty... and behold the Mexican keeper's glorious garments

Klinsmann was just as potent as he had been four years earlier; the difference this time was that Germany’s midfield lacked the same drive. Having got the only goal in the opener against Bolivia, he headed an excellent equaliser against Spain, scored two against South Korea – flicking the first up for a volley, taking down a cross on his chest for the second – and then got Germany’s second in a 3-2 win over Belgium after a slick one-two with Rudi Voller. Quick, mobile and deadly, he was arguably the best striker in the world at the time.

He may have become a figure of fun later in his career, as the belly expanded and he took up a range of unlikely jobs including being a vacuum-cleaner salesman, but in the early '90s Brolin was the creative spark that lit up an over-achieving Sweden side.

He was aided by having a potent strike force in Martin Dahlin and Kennet Andersson – with a young Henrik Larsson coming through – but it was Brolin’s imagination that fired Sweden. He converted a penalty against Russia, then scored an excellent opener in the quarter-final win over Romania.

The tendency has always been to deride Brazilian defenders, but there was nothing naive or flamboyant about Marcio Santos, a dominant centre-back who won ball after ball in the air but also had sufficient awareness of the geometry of the pitch to lay the ball off intelligently.

He contributed a memorable toppling header in the 3-0 win over Cameroon, but perhaps his best game came against the USA, holding the side together after Leonardo had been sent off for an elbow on Tab Ramos: one of five clean sheets Brazil kept in the tournament.

As age caught up with the great Franco Baresi, another AC Milan defender emerged as Italy’s colossus. Left limping on the wing in the 1-0 defeat of Norway, he was forced into the middle to replace Baresi at centre-back in the group game against Mexico, but on his 26th birthday he performed with all his customary elegance, despite an injured ankle.

This was the bright side of Italian defending, not cynical or violent, but based on an acute understanding of angles: defending as mathematics, as art. He captained the side through to the final, when Baresi returned.

Others may have been more eye-catching, but no-one was as important in the triumphant Brazil side as Dunga. He was as far removed as it possible to be from the popular stereotype of the Brazilian player: a hard-working grafter a world away from Falcao and Toninho Cerezo, the deep-lying midfielders of 12 years earlier.

His gift was not for tricks or elegant long passing, but for discipline, positioning and the enforcement of coach Parreira’s decidedly unromantic philosophy. He was the enforcer, the facilitator, and when he took the captaincy from Rai, who had had a poor season with PSG, the squad went with him.

The defining images of Baggio from 1994 are of disappointment: trudging from the field after being subbed following Gianluca Pagliuca’s dismissal against Norway, and of course sinking to his knees after missing the penalty in the final. There was a sense he was never fully trusted by Arrigo Sacchi, but he also enjoyed moments of brilliance.

He improvised a precise finish to equalise late against Nigeria before getting the winner from the spot; rounded Andoni Zubizarreta to get the winner against Spain; and added two brilliant goals against Bulgaria in the semi – the first a swerving run, the second a neat half-volley.

He was the last of the great playmakers, and 1994 was probably the last time the young, bubbling Hagi really performed on the world stage before his retreat back into brilliant crabbiness. There was an elegance and a sense of mischief about him; the street urchin who had found his place at court. Short, stocky and bad-tempered, he also had a grace about his play; rarely have the torments of creation been so clearly written in a player’s demeanour.

Everything Romania did seemed to go through him. That was true even when fielding six midfielders to smother Colombia in their opener. Twice he laid in Florin Raducioiu to score, before curling in a preposterous goal from wide on the left. Did he mean it? He said yes, and the little glance he gave towards the far post just before looping the ball inside it tends to support him.

Where Romario scored in nudges, Hagi dealt only in extravagance. He pinged in a 25-yarder in a 4-1 defeat to Switzerland, and then slashed Ilie Dumitrescu’s square ball high beyond Islas in the 3-2 second-round win over Argentina. He converted his penalty in the shoot-out against Sweden in the quarter-final, but couldn’t prevent defeat.

Perhaps surprisingly, it wasn’t the eventual champions' main striker Romario who took the Golden Boot in the USA. That honour was instead shared between Oleg Salenko and Hristo Stoichkov, although given five of the Russian’s goals came in one absurd game against a dispirited Cameroon, the hirsute Bulgarian could consider himself the moral winner.

Having lost their opening game 3-0 to Nigeria, Bulgaria needed a nerve-steadier early in their second match against Greece. They got it when Stoichkov converted a fifth-minute penalty, before knocking in another in the second half as Bulgaria won 4-0. It was his goal against Argentina in the third group game, though, running clear to squeeze past Luis Islas, that suddenly flooded the talented Bulgarians with belief.

They won 2-0, finished second in the group, and set up a second-round clash with Mexico. Again the timing and pace of Stoichkov’s run were exemplary as he ran on to give Bulgaria the lead from Emil Kostadinov’s through ball. Mexico levelled, but Stoichkov wasn’t needed in the shoot-out.

His finest hour in a Bulgaria shirt came in the quarters against Germany. It wasn’t just that he swept in a free-kick to level a quarter of an hour from time; it was his leadership and the sense of inspiration he provided. His penalty in the semi-final couldn’t prevent a 2-1 defeat to Italy.

He was flash and brash, and wound up his own team-mates almost as much as the opposition, but in 1994 he lived up the hype his behaviour imposed upon him. In Carlos Alberto Parreira's largely pragmatic side, he provided a rare glimpse of the dazzle of Brazilian stereotype, and scored the goals that turned functionality into success.

His tournament began well, as he jabbed home a corner to give Brazil the lead against Russia and was then fouled for the penalty from which Rai made it 2-0. A controlled toe-poke – very much a trademark – opened the scoring in a 3-0 win over Cameroon, and then found a equaliser against Sweden, bursting through two defenders before prodding past Tomas Ravelli. Romario's character may have been flamboyant, but his finishing was almost minimalist.

He laid on Bebeto’s winner in the second round against USA, and flashed in a half-volley to put Brazil ahead against Holland in their epic quarter-final. In the semi, as Brazil were frustrated by Sweden, it was Romario who dashed onto Jorginho’s cross to steal a winner 10 minutes from time. And in the shoot-out in the final, of course, Romario could be relied upon to convert his penalty.