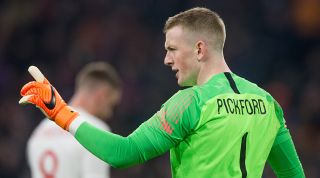 A good goalkeeper, maybe even a very good one in the future, but nevertheless out of form and still not quite ‘right’ after that nasty ankle injury in Germany. Jordan Pickford is the starter, so England aren't going to win or lose on his availability or contribution.

All being well, he shouldn’t see the pitch. Whether he or Butland are second choice behind Pickford is hard to know, but it’s a decision Southgate hopefully won’t have to make. His inclusion is really just a deserved reward for his fine performances for Burnley.

Not of great relevance this time around, but perhaps a selection designed to expose a young, long-term prospect to a tournament environment. Maybe – and, yes, this is guesswork – it also suggests that Southgate sees Kyle Walker as a bona fide centre-back too. Alexander-Arnold’s involvement does at least imply that he wants that option available to him.

A good season at Spurs and never really in danger of being excluded. He’ll back up Kyle Walker (with a sense of deja vu) and, if needed, provide a more balanced, delivery-based option on the right. If Walker is employed at centre-half, jump Trippier up a further 10 places on this list.

Southgate has great faith in Loftus-Cheek, as he does in some of the other graduates from his under-21 team. How he would fit into any side containing Dele Alli remains unclear, but England need more creativity in their midfield. If it becomes absolutely necessary, Loftus-Cheek is capable of splitting lines and providing it.

The fourth of the four recognised centre-halves. As per the above, Alexander-Arnold’s inclusion probably may mean that Walker will be used on the outside of a back three, making Jones very much a peripheral figure in this squad.

Warranted on the back of a strong season with Manchester United, but a bit of an outlier. England need pace and penetration from deep and, the wrong side of 30 and a right-footed player on the left, Young is very different to the other full-backs.

Another for whom versatility was crucial. Delph has hardly played in midfield for Manchester City this season, but he’s earned a place by virtue of covering more than one position - that’s clearly what gave him an edge of Jake Livermore (who is on the standby list).

Like a few others, Delph will only become truly vital should injuries occur in midfield. That being said, his defensive abilities and mobility could allow England to adopt a spoiling, three-man midfield should the need for extra protection arise.

A selection which will draw the nation’s ire. Truthfully, though, Welbeck is a highly effective defensive forward.

He should never be relied upon to score goals (even though he's got 15 in 37 caps) – and that won’t be Southgate’s thinking – but he’s exactly the sort of player who will be needed in the wide positions should England run into a true heavyweight in the knockout stages. Welbeck could perhaps even be of use against Belgium. He has in the past saved his best form for England too.

Probably destined only for the bench, but still exactly the kind of option that England will need if they’re chasing a game. Like club-mate Jesse Lingard, Rashford is also someone prone to producing his best when it matters the most and, historically at least, this country has never had enough of that kind of player.

Cahill’s inclusion was a surprise, because he hasn’t had his finest season at Chelsea and does now look slightly beyond his best. However, it’s the clearest indication that England intend to start with three centre-halves. In which case, given his experience of that system at club level and prior international exposure, Cahill will shoot up this list.

Beyond John Stones, the other centre-halves are fairly interchangeable. Maguire is the best of the rest, though, and actually also a finer footballer than most realise. He’ll compete for a starting place with Cahill.

The kind of player who nobody will even notice – until, from nowhere, he does something decisive.

Lingard has that happy habit of being quite unremarkable and yet still making frequent, telling contributions. He’s a mobile player and certainly has a nice range of finishes, but he would be nobody’s idea of World Cup starter. And yet he’s the perfect impact substitute. Not because he’s quicker, better, or more skilful than any of the more celebrated players, but because he has the character for the role.

History shows that when the big moment arrives, Lingard actually embraces it. How novel.

He’s very high up this list for someone who is expected to remain on the bench, but what an option he could be. In the group stage at least, England will likely face deep-lying sides content to frustrate them, but the further they go in Russia then more relevant Vardy will become.

Whether Southgate has the distribution in his midfield to properly exploit that threat is questionable. However, Vardy is still one of the finest finishers in the country and has the acceleration to trouble any defender.

Rose is not quite the player he was last season, but he’s another Southgate favourite and he’ll presumably start on account of his natural chemistry with the Tottenham contingent in this squad. Somehow, he needs to rediscover that burst of acceleration that he’s been searching for since recovering from injury.

He’ll partner Henderson at the base of midfield, but Dier has utility worth too. He’s a capable centre-half and also a competent full-back, so his availability covers a broad range of positions. Nominally a holding player, his distribution should also be valuable. England will struggle to move the ball forward with any sort of verve, but – as seen at Stamford Bridge in April – he does have a couple of useful passes up his sleeve.

Times are obviously lean when Dier is your ‘Xavi’, but nonetheless he will still be responsible for the side’s rhythm out in Russia.

Before anyone complains: yes, he’s going to start. In richer times, he would be a second choice behind a more gifted alternative, but Southgate has always been loyal to Henderson and, presumably, will base much of his midfield planning around him. Should he be injured between now and the middle of June, Fabian Delph or even Jack Livermore would suddenly become a pivotal player. Think about that.

Like Raheem Sterling, moving from a side of Manchester City’s overpowering strength to a team of England’s standing will come with its only challenges for Stones. Conveniently, though, Southgate’s need is the same as Guardiola’s; in the sense that Stones will be required to begin moves from the back and find a quick route into midfield.

He’s England’s most cultured defender and, without him, the unit will look quite archaic in style. Stones is fundamental to the intended way of playing.

Arguably the most gifted player England have. He’s also unique in what he does; drifting between the midfield and forward line, meaning that if he were to twang a hamstring, he would have no natural replacement.

How important Dele proves to be will ultimately depend on how he’s used - his best position is close to Harry Kane, high up the field - but he’s one of the few members in this squad to offer any sort of variation. He has to play and he has to play well.

Irrespective of which position he occupies, Walker is of the utmost value. He will either provide the thrust from full-back, which is critical given England’s lack of wingers, or he will be one of the outside men in a back three. Either way, he’ll carry great responsibility for England’s progress.

Goalkeepers are essential. In fact, one could argue that every tournament performance England have given since 2002 has, in one way or another, been influenced by what happened between the sticks. Scott Carson’s dreadful night at Wembley and Paul Robinson’s air shot in Croatia prevented them both from going to Euro 2008, Rob Green’s disastrous 2010 hardly needs revisiting, while Joe Hart has been dropped for a series of poor competition performances.

Pickford is talented and he also has the temperament to deal with the pressures which come with starting for England. That’s really what makes him essential - because this selection issue has been resolved so slowly, nobody could really say the same about Nick Pope or Jack Butland with any confidence. Butland has been the only one to be given significant game time.

An interesting one, because there’s no guarantee that the developments in Sterling’s game will translate into the England team. Much of what he's done so superbly for Manchester City has depended on their style and ability to manufacture opportunities.

He’s grown as a player and is certainly a more rounded attacking component than he once was, but his influence will still depend on Southgate’s ability to create the right conditions for him at the top of the formation. Incredibly valuable, but still reliant on his surrounding conditions.

Quiz! Can you name every England player to feature in a major tournament squad from 1996 to 2016?

Obviously essential, but only if his form continues to improve. Tottenham rushed Kane back to action after his latest ankle injury and the cost has been obvious: he’s looked clunky, awkward on the ball and clearly lacking mobility.

Still, there were signs of recovery in his performance against Leicester and, hopefully, that’s a start of a revival. It needs to be really, because he’s still his country’s only genuine world-class player.