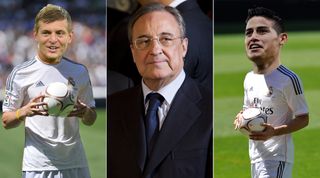 Due to fun-ruining inventions such as global scouts and something called television, the Poborsky-Diouf Syndrome is rarely seen in football these days, aside from the odd outbreak around White Hart Lane.

This particular malady occurred mainly in the 1990s when a previously unknown footballer would have an outstanding couple of games in a big tournament and get a plumb transfer to a desperate club, before doing next to nothing for five years.

Real Madrid tend to develop a lighter, less harmful strain of Poborsky-Diouf: instead of unheard-of players, it is usually the more glamorous variety which gets Florentino Pérez’s Galactico belly a-grumblin'.

Over the past month, two top World Cup performers have had their fair share of front covers on Marca and AS – Toni Kroos and James Rodríguez. Neither is a seabed-dwelling oyster being uncovered for the first time, but both have been very noteworthy in the media, something that especially gets Florentino’s digestive juices flowing.

Newly-crowned Welt-Meister Kroos is still being cagey over his footballing destination next season, but the stones point towards the Santiago Bernabéu being his home in a tasty €25 million deal, due to the Bayern Munich player having just one year left on his current contract. Indeed, AS sages say that the presentation could take place as soon as Thursday.

Monaco man James is making things a little more obvious. The self-confessed all-rounder isn't so much issuing a come-and-get-me plea to Real Madrid as standing atop the tallest building in Tokyo, dressed in a Lady Gaga shrimp suit in front of a rampaging Godzilla. “It would be a dream to sign for the club of my dreams,” squealed the dreaming Colombian in an interview with Marca over the weekend.

Should both signings take place, this would leave the Real Madrid squad a little unbalanced and lacking defensive representation – especially if Sami Khedira is flogged, one of the possibilities, with Arsenal among those interested in signing the suspiciously unattacking German. However, fussy stuff like tactics has never been Real Madrid’s big concern and that’s what makes the institution so much fun to observe.

Indeed LLL feels that Pérez may even dispense with the services of Iker Casillas, Pepe and Sergio Ramos due to their iffy World Cups and go for a 0-10-1 formation with James, Kroos, Luka Modric, Xabi Alonso, Angel di Maria (unless he goes to Manchester United to help fund Florentino's financial flutters), Cristiano Ronaldo, Gareth Bale, Isco, Asier Illarramendi and Jesé packing the midfield behind Karim Benzema, potentially the only striker in the team.

This may have CR7 feeling a little left out, but the Portuguese Man-of-Phwooaar knows there is still big love from him in Madrid with Marca giving the forward the annual Di Stefano Award for being the best player in La Liga last season, pre-empting Messi’s FIFA World Cup accolade in the WTF stakes by about a week.

Transfer gossip being transfer gossip and all that means that there is one certainty with Real Madrid over these two players. Whichever comes will get the mother of all presentations... an option that is currently unavailable to certain other clubs.