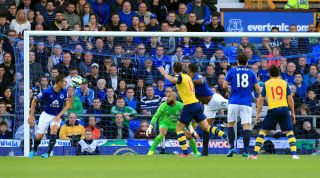 Arsenal came back from 2-0 to pinch what had looked an unlikely point at Goodison Park. The immediate media reaction suggested the result was something akin to daylight robbery, yet, despite Everton playing well for much of the middle hour of the game, Arsenal had their own spells of superiority too.

The Gunners actually started the brighter, and looked the more threatening side up until Everton took the lead against the run of play on 18 minutes. In fact, the superb Gareth Barry cross that Seamus Coleman nodded past Wojciech Szczesny to open the scoring was the first successful pass the Toffees had played into the Gunners' penalty area.

That goal seemed to ease the pressure on Roberto Martinez's side, and they began to play with the same freedom and appropriately-applied aggression as last season. For the next 35 minutes or so, Everton were dominant. Their midfielders were constantly pressing and harrying Arsenal's players in possession, and made a high number of tackles in the middle third of the pitch. However, perhaps down to fatigue, this really dropped off in the last 25 minutes of normal time.

Suddenly, just as the game looked lost, Arsenal found a second wind. Arsene Wenger replaced the booked Jack Wilshere with Santi Cazorla, deployed the Spaniard on the left and shifted Mesut Ozil inside to his favoured central position. The German had struggled to make much impact on the left flank, but Cazorla wouldn't have the same problem. He did what Ozil had failed to do all game and beat a man before playing a dangerous cross into the penalty area. As has so often been the case over the last 12 months, Aaron Ramsey was their to gleefully punish some hesitant defending, tapping in to bring the Londoners right back into the match.

Now Everton were nervous, and it showed. The first Arsenal goal was a momentary lapse of concentration from Everton's defence, for the second it seemed their minds were somewhere else entirely. Ramsey appeared to overhit a cross from the right but, as the Goodison crowd mocked a pass they thought was going out of play, Everton switched off. Nacho Monreal judged the situation far better, bringing the ball down and lofting a perfect cross (at the sixth time of asking) in for Olivier Giroud - another substitute - to nod in at the near post.

Aston Villa and Newcastle played out a rather tepid goalless draw in Saturday's lunchtime kick-off. Villa had the opportunity to follow their 1-0 win at Stoke with another three points against a new-look Newcastle side, but were more than a little reserved in their approach to the game.

Paul Lambert's side looked to keep their opponents at arm's length and strike on the counter, but rarely found the required precision in their passing in (and in to) the attacking third. Every time they did create an opening, they failed to test visiting keeper Tim Krul. Villa hit the target with 0 of their 9 shots at goal - 5 were struck off target, while 4 were blocked.

The hosts' tactic allowed Newcastle plenty of time on the ball. There were a few impressive flashes, but there may be some concern that, for the second game running, the Toon failed to turn some good possession into more than a couple of clear openings, let alone a goal. However, given the extent of the recent re-build (four of the Magpies' summer signings started this game - another two appeared from the bench), Alan Pardew shouldn't lose too much sleep just yet.

Most impressive of Mr Pardew's new class was Remy Cabella. The 24-year-old was busy in the final third - completing more passes in attacking areas than any other player on the pitch (18) - but also did his defensive duty, making a game-high 4 successful tackles. His combination of work-rate, grit and flair look like making him a huge favourite with the Geordie faithful in the months to come.

Chelsea had to be patient before sealing their second win against a newly-promoted side in a six days. Leicester were widely expected to get a hiding at Stamford Bridge, but were able to keep Jose Mourinho's side at bay for over an hour. Diego Costa bundled home his second goal for the Blues after fine attacking work by right-back Branislav Ivanovic.

Yet it was the scorer of Chelsea's second goal who was the star of the show. Eden Hazard not only put the result beyond doubt by firing a deflected show past Kasper Schmeichel on 77 minutes, but also completed 48 of his 54 attempted passes (a rate of 89%), was successful with 6 of his 11 attempted take-ons, found the target with both of his 2 shots, and created no fewer than 7 goalscoring opportunities for team-mates.

Chelsea may have dominated possession (they enjoyed 64.3% over the 90 minutes), but their afternoon wasn't without its scares. Leicester only completed 66 passes in the attacking third, but still forced 4 shots at goal. Their best chance fell to David Nugent who, when through one-on-one, was superbly denied by Thibaut Courtois. That opening came at 0-0, and the outcome could have been rather different had it not been for the intervention of the Blues' other brilliant Belgian - who had largely been a spectator up until that stage.

The only thing missing from the former Anderlecht midfielder's display was a goal. He registered 2 shots, set up 1 chance, completed a game-high 4/5 take-ons, made 13 ball recoveries (more than any other Hammer) and won all 6 of his tackles and 5/9 aerial duels.

"He's got 'modern day midfield player' written all over him," said Allardyce. "The one thing that may be missing is a goal or two, but he's high-energy, two-footed, great box-to-box, competes in the air, tackles. It's great to see a player who has a smile on his face every day. He's lived his dream coming to play in the Premier League."

Not a classic, as they say. Two teams who had been tipped to struggle this season - but who both performed perhaps above expectations last weekend - stuttered to a draw that will probably have been marginally more pleasing a result for the visitors.

The undoubted star of the show was Serbain winger Dusan Tadic, the man tasked with replacing Adam Lallana as the Hampshire side's creative spark. On this showing, he has half a chance of doing just that. Tadic attempted 3 shots (a game high), completed 21/30 passes in the attacking third (a game high), created 2 chances for team-mates (a game high), and was successful with 2 take-ons (wait for it... a game high). This Southampton team is still finding its shape, but you get the feeling that however Ronald Koeman's side perform this season, Tadic is going to be at the heart of it.

Garry Monk's side won this match thanks to an early goal from Nathan Dyer, who burst on to the end of a Gylfi Sigurdsson pass before tucking the ball past Tom Heaton at the near post. Yet the result could very well have been different, with the newly-promoted side coming on strong in the second half.

If the first half was something of a chastening experience for the Clarets, the second half was a vast improvement - the visitors completely knocked Swansea out of their rhythm. In the first 45, the South Wales side completed 325 passes - not an unusual number by their standards - yet, in the second, they only managed 147 (Burnley's completed passes, meanwhile, went up from 154 to 200).

As a result of this, Burnley were able to carve far more openings after the interval (9 compared to 3 in the first half), and in the end will consider themselves unlucky to have been beaten. They may have no points on the board, but Burnley can certainly take some encouragement from their first two showings of the season.