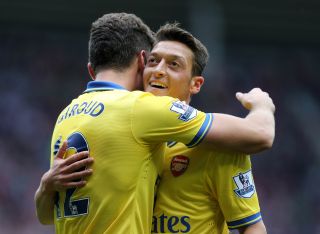 The stats suggest a convincing and straightforward Manchester United victory - but this one was really all about a decisive two-minute spell on the stroke of half time. Just moments after Palace new boy Dwight Gayle did everything but find the net at one end, the plucky visitors found themselves a goal and man down after Kagisho Dikgaco hauled down Ashley Young inside the box.

Of course, giving the champions that advantage meant curtains for Ian Holloway's men.

Up to that point the south Londoners had held their own admirably. Indeed, as @CombinationPlay tweeted in at the break: "Carrick not as reliable as usual in the passing department, but interceptions impressive." The England man would treble his passing figures and make only one more interception in the entire second half as David Moyes' side took control.

Yet again, however, a chunk of United's play was diverted wide with minimal success. Against Liverpool, Moyes' side completed just 6 of their attempted 32 crosses as they lost 1-0 at Anfield. Yet they showed no sign of a tweak in strategy against Palace, completing just 5 of their 41 crosses. Holloway's side, meanwhile, attempted (and completed) just 1. So far it's a game of percentages that the champions are losing.

Villa's 26th consecutive game without a clean sheet - the longest run of its kind in the Premier League - and a rare away win for Newcastle. After just four games the Magpies have already matched last season's tally of just two triumphs on their travels, courtesy of more Hatem Ben Arfa brilliance in the West Midlands.

Toon fans are never quite sure what they're going to get from the flairy Frenchman, but today Ben Arfa ran the show with a goal and key contribution to Newcastle's crucial winner.

Not unusually he led the way with 4 shots (3 on target), one of which was side-footed past Brad Guzan and another saved by the American - only for substitute Yoan Gouffran to pounce on the rebound.

His 5 of 8 completed take-ons demonstrates a player in confidence - and that's a welcome sight for Alan Pardew, for whom the last 12 months has been tough at the best of times.

As @zubair_ pointed out, Newcastle have registered at least 15 shots on goal for the third consecutive game.

Twelve shots each culminating in a goal apiece. Hardly figures to get giddy about, but then this one was never a contender for first on Match of the Day now, was it?

This lop-sided affair was all about one side of the pitch - Fulham's Sascha Riether vs West Brom stalwart Liam Ridgewell. While Riether outpassed his foe (and every other player on the pitch bar Scott Parker) in a typically marauding display, Ridgewell's 10 clearances and 5 of 9 aerial duels won were crucial as the Baggies snatched a late point in west London.

Unsurprisingly, Riether to Parker (22) and Parker to Riether (17) were first and third in the passing combination stakes respectively. To me, to you... zzz.

A tale of two compact midfields and some wayward finishing.

Hull will feel they should have walked away from this textbook six-pointer with maximum honours, having notched 18 efforts to the visitors' 10. Cardiff, for all their possession (they completed 80 more passes than Steve Bruce's side), mustered a miserly 2 shots on target.

Bruce will come away pleased with the displays of Maynor Figueroa and Tom Huddlestone in particular. The former led the game for tackles (4) and interceptions (6), and hit impressive numbers for ball recoveries (8) and clearances (5).

Huddlestone, meanwhile, looks to be relishing the first-team football afforded to him by Bruce so far this season. The former Tottenham man was Hull's only representative in the game's top five passers and created the game's highest number of chances (4) - one, the assist for Curtis Davies' first-half opener.

Those of you following Saturday afternoon's action could be forgiven for forgetting this game even happened.

It was dubbed the Mark Hughes derby ahead of kick-off - and the Welshman will have left the Britannia Stadium satisfied after seeing Stoke engineer a well-deserved goalless draw against Manuel Pellegrini's wannabe champs.

Indeed, the hosts enjoyed more shots (11 to Man City's 10) and restriced their lacklustre visitors to just 2 efforts inside their penalty area.

The frustrated Spaniard endured poor service all afternoon, often collecting the ball out wide or being forced to fight losing battles in the air.

Mesut Ozil's name may have been the one on every Arsenal fan's lips, but by full time at the Stadium of Light it was another of the Gunners' midfielders that walked away with the headlines.

Aaron Ramsey, starting in a more unfamiliar role on the left of Arsenal's three-pronged attack in the absence of Santi Cazorla, bagged a brace in the North East to sink Paolo Di Canio's Sunderland.

That's not to say Ozil's debut went without merit, though - far from it. It took the German just 10 minutes to grab his first assist for the Gunners as he squared for Olivier Giroud's fourth goal in as many league games. The 24-year-old German led the game in attacking-third passes (34/38), chances created (3) and take-ons (3) as Arsene Wenger left Sunderland a happy man for the third season running (in the league at least).

The final word is reserved for Ramsey, though, after the Welshman's dazzling display on Wearside. The previously maligned 22-year-old is sneered at no more after notching his fifth and sixth goals of the campaign for Wenger's men. He netted with 2 of his 3 attempts, and completed the game's highest number of passes (81/88) and tackles (7).

Aaaaand the award for most one-sided game of the season goes to...

While the scoreline suggests a comfortable win for Spurs, the reality was an utterly dominant performance from the hosts capped by a stellar debut from recent signing Christian Eriksen.

Andre Villas-Boas' men outpassed hapless Norwich 568 to 192 (with 69% possession), outshot them 23 to 5 and frustrated the visitors into 12 fouls. The Canaries' pitiful influence screen tells its own tale.

In a game of notable individual feats, Kyle Walker again led the passing stakes (84/98), Townsend was at his tricky best (6/10 take-ons - another game high) and debutant Eriksen created 3 opportunities for his team-mates - including the assist for Sigurdsson's opener. The game's top three ball rescuers were all Spurs men, meanwhile, as Danny Rose (10), Jan Vertonghen (10) and Mousa Dembele (9) all recycled possession well for the White Hart Lane side.

All in all, a very good day at the office for Villas-Boas' boys. As for Norwich, there's work ahead.

So Jose isn't going to have things all his own way.

Instead it's Roberto Martinez smiling for the first time this season after his terrific Toffees grabbed a narrow victory over Mourinho's men.

A combination of defensive diligence, midfield grit and, finally, some accurate finishing, means Everton finally have their first win of the season. Sure, Chelsea outshot the hosts 22 to 11, but they managed only one more effort on target. It was a debut to forget for Samuel Eto'o, whose wayward finishing cost his side dear at Goodison Park.

For the first time this season, Everton were beaten in the possession stakes. But Martinez certainly won't care after seeing his side waste chance after chance in their first three games of the campaign.

Phil Jagielka and Sylvain Distin were colossal at the back with 12 and 8 clearances respectively, Steven Naismith battled up front (6/11 aerial duels won) with the match winner to his name, Leon Osman (6 tackles, 4 interceptions) was as reliable as ever and Ross Barkley (7 take-ons) showed no sign of stagefright.

Everton fans might tell you it was worth the wait.