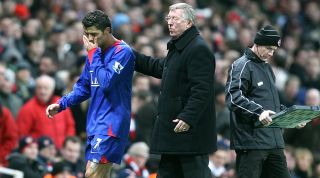 A crippling lack of confidence isn’t one of Cristiano Ronaldo’s flaws, but Alex Ferguson twice took advantage of the forward’s assurance, winning wagers that he couldn’t score 10 goals in 2003/04 and 15 in 2004/05.

It was pointless: “I tried to pay, but he wouldn’t take a penny,” remembers Ronny, who raised the stakes to £400 the next season, smashed his new 15-goal target, then wouldn’t take any cash himself.

Rumours from a “club source” – ie made up by tabloids – that CR7 challenged Fergie to a loser-shaves-their-head contest in 2007 couldn’t be verified.

Being imprisoned for weeks in a hotel without quad-bikes, fireworks and discotheques for distraction is harrowing for any English footballer, but at France 98 the ‘bants’ barometer nearly broke as Glenn Hoddle’s squad decided to pass the hours by getting song titles into TV interviews for £100 a pop.

We’ve heard of in-game betting, but this is ridiculous: during the 1994 FA Cup Final, Chelsea captain Dennis Wise somehow managed to lay odds with Eric Cantona as the Frenchman lined up to take Manchester United’s 60th-minute penalty. “Wisey, being Wisey, bet him £100 he’d miss,” remembers Gary Pallister. “It didn’t work, but fair play, he paid up.”

4. Boys out of the barracks

In the 70s, the idea of a manager entering a turbo-heeled player into a New Year’s Day race and the entire team gambling on victory wasn’t considered unprofessional. But when Bobby Robson did such a thing with Ipswich’s Kevin Beattie, the results certainly were.

Midway through the Powderhall Sprint, the underpants-eschewing Beattie’s manhood emerged from his shorts, causing him to slow down while trying to arrest his mini-trousers’ slide, and lose. “We were all sick,” recalled youth coach Charlie Woods, who’d witnessed, ahem, a tidy packet evaporate thanks to Beattie’s misfortune.

Putting Paul Merson and Paul Gascoigne in a shared house seems like one of the least sensible administrative decisions Middlesbrough have ever made, and it’s little surprise that the pair were soon gambling on everything.

One suicidal contest saw thousands staked on who could stay conscious longest after taking Gazza’s sleeping tablets. “It’s a miracle it didn’t kill us,” admits Merse in his biography, How Not To Be A Professional Footballer. “But there was nothing to do in Boro.”

There are many doltish ways to blow a student loan – drink, drugs, dry ice at parties – but one academic did it in spectacular style in 2010 after dropping the lot on a sure-fire thing.

With Angola whupping Mali 4-0 in the Africa Cup of Nations, and 12 minutes left, a punter called ‘Big Matt’ piled on £4,400 worth of book and bus money in an attempt to gain just £44. Sickeningly, Mali rallied to 4-4, leaving Matt broke. A harsh lesson from the University of Life.

7. The people vs Johnson’s “backside”

At Bristol City, gaffer Gary Johnson was so convinced defender Liam Fontaine would never score for The Robins, he claimed he’d unveil his managerial rear end in Burton’s High Street window should it happen.

Goal-shy Fontaine finally netted in November 2007, but Johnson bottled the punishment. “I’ll have to check with my lawyers,” spluttered Johnson. “I can’t believe everyone wants to see my backside so much.”

Pocket-sized England internationals Jermain Defoe and Jack Wilshere put their money where their mouths are: in 2011/12, with Spurs well ahead, Wilshere offered odds that the Gunners would catch up. The Tottenham man lost, paid £3,000 to charity, learned nothing, and repeated the whole farrago the following season.

9. Send in the clowns

10 of the easiest title wins in English football history

Nobody fancied Bolton in 2001/02, so their unpredicted success led to a spree of forfeits for those speculating against them. Lawro had his trademark follicles shaved by a team of Trotters (including FFT’s Gary Parkinson) after staking his ‘tache on their relegation, and even Bolton’s management, who’d bet the players they couldn’t win by more than three goals, were humiliated.

After an opening-day 5-0 shellacking of Leicester, Sam Allardyce was paraded through the town dressed as a clown and chairman Phil Gartside ate a plate of sheep’s balls. Nice.

Competitive dads are nothing new, but putting hefty sums on your offspring’s future success is a guaranteed way to ramp up the pressure. Chris Kirkland’s dad trousered £9,900 a decade after staking that his lanky loin-fruit would represent England (he managed half a game under Steve McClaren), while Ryan Tunnicliffe’s old man banked £10,000 from £100 after his pup played for Manchester United. He’ll bag £35,000 more if young Tunnicliffe plays for England. Good thing Kirk Jr. has already brought home the bacon.

This feature originally appeared in the October 2013 issue of FourFourTwo. Subscribe!